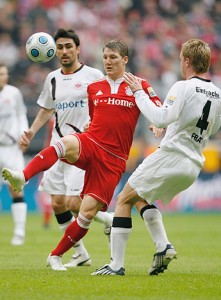 FC Bayern Munich travel west to Frankfurt seeking their 3rd victory over Eintracht Frankfurt this season. The match will air live on ESPN Deportes and ESPN 360 at 10:30 a.m. Eastern (don’t get tricked by Daylight Savings). Good signs abound for a Bayern victory: In the previous two meetings (1 in the league, 1 in the Pokal), Bayern won by a combined 6-1. The last time Bayern beat the same opponent 3 times in one season was 2005-06, and in that instance the victim was…you guessed it, Eintracht Frankfurt. Bayern won both Bundesliga matches and then went on to defeat them 1-0 in Berlin to hoist the Pokal in one of the most boring Pokal finals in recent memory.

Let Me Frank About Frankfurt

To me, Eintracht Frankfurt has been one of the “that can’t be right?” teams when I look over the table each week. For much of the season they have hung around 7th or 8th place, and have been at least in the fight for the UEFA Cup spots. There’s just no way they are really that good. If you look over their season, the results are about what you’d expect, except for one deviation: they beat Bremen twice. So that probably gave them 5 points more than you would have penciled in for them in an average season. They are really about the same team at home as they are on the road, so no real home pitch advantage. Alas, the table has been correcting itself of late, with Bayern now on top, and Frankfurt, losers of 3 straight, now sitting in a more appropriate 10th.

Selection dilemmas are definitely at the forefront for Frankfurt as they may well have been called Hackfurt last week. Right back Maik Franz and defensive midfielder Selim Teber were both sent off after seeing their 2nd yellows of the match. This is probably really good news for injury prone Bayern players as these two actually lead the league in cards. Teber had committed more fouls this season than noted hack machines like Frings, Jarolim, Rafinha and Van Bommel. Former Bayern amateur Patrick Ochs will also be suspended after picking up his 5th yellow last week. Ochs is the leading assist man on the club, and served up Alexander Meier’s goal in the first this match between the clubs this season. For the first time in what seems like forever, you won’t have a Greek striker lining up for Frankfurt as both Liberopoulos and Amanatidis are out. It’s bad for Greeks everywhere these days apparently. In recent weeks, Halil Altintop has been lining up as the center forward. Saturday’s match will be the first time that the brothers Altintop, born a few minutes apart in Gelsenkirchen, will be on a pitch without Schalke blue being involved. Look for Germany’s U-20 right back Sebastian Jung to slot in for Franz at right back, and for American midfielder Ricardo Clark to have a chance at making his debut for Frankfurt with Teber out.

Leave Your Mediocrity Behind

First, the known absentees are Mario Gomez and Martin Demichelis. Demichelis is now at least running at the Säbener Strasse, and hopes to join in the full training next week, when the Hannibal Lecter jokes will begin in earnest. Ribery’s status is almost as always, on any topic, a mystery. The good thing is, that Bayern should be able to work their way through this one without him if need be. Diego Contento played a full 90 minutes in Bayern II’s 4-2 victory over 1. FC Heidenheim in Munich on Wednesday, so would seem to be ready for action, although he might see part time duty if he is expected to start the Pokal match midweek. Bastian Schweinsteiger will return from suspension, and Hamit Altintop will be available after being left out of the squad due to the flu last week.

With the left back position to be once again occupied by either Alaba or Contento, it’s a fortunate stroke of luck that Frankfurt’s right will probably be a combo that hasn’t played together before. This will definitely take some pressure off, and may allow whichever player starts to inject themselves more into the offense. I really don’t see Frankfurt taking a “tent city” defensive approach, and this feels like the match where Bayern will score first for once. This ought not to be as tough as last week, and I expect a comfortable win.

Note: I will probably not be able to watch this match live, so the coverage from here may be a little slower than usual, but there will be a post here for comments as usual.

Finally, there will be a brief post immediately after the Champions League draw is made tomorrow. This will happen shortly after 7 a.m. Eastern, and you can also get info from the Bayern Offside Twitter feed here. There will be wall to wall Champions League coverage from all kinds of sites tomorrow, but I’m going to strive to give you plenty of Bayern-related tidbits once we know the opponent via the tweets as well as in the post. If you haven’t voted in our Champions League poll, you can still do so here. It will close to voting once the draw begins.