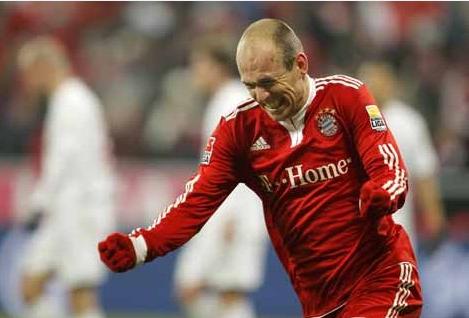 Today, FC Bayern Munich did not face its toughest opponent; but for this day, it was a tough opponent. Today, FC Bayern did not play its most important match, but it was important nonetheless. The performance of the team is sure to cause anxiety to some, and frayed nerves for most. But for Arjen Robben, it was the true-life version of the match that any kid in a back yard or a crumbling alley has played. You don’t fantasize about winning 4-0 or 5-0, it is always the comeback fantasy that brings the most individual satisfaction, when the sun’s going down, and you’re thirsty and tired and alone, but booting that ball still..

Let us not forget, on a day with plenty to complain about, the sheer individual will and talent displayed by the great Arjen Robben. He’s earned the “great”. What a tremendous week this man has had.


Thoughts on the Day

I actually did not have the best conditions in which to watch this match, and I didn’t have any sound the entire time. It was about the only day this season that I probably should have stayed at home and played with the feeds. Nevertheless, there’s plenty to say.

*This match was a quintessential example of why non-Bayern fans hate FC Bayern. The only thing that would have made it better is if other full stadia would have been playing at the same time and watched the scoreboard dejectedly as Bayern came back. Well that and Robben putting on a Darth Vader mask.

Klose: There is no way a player of his supposed caliber can miss that many good chances in front of goal. It simply can’t happen. It’s not like he’s going to improve in a year’s time either, so at this point, I’m not even sure he should be around next year.

*One thing this team does over and over that annoys the hell out of me is that instead of trying to get a shot, they try for the perfectshot. Today had to be the all time record for me shouting “Shoot!” or it’s variations at the TV.

*Alaba played more like a 17 year old today. He was clearly out of position on the Freiburg goal. I don’t think it was wrong to play him, but I do think his talents are a bit wasted when he’s at left back.

*If anyone was a little skeptical about how important Schweini really is to the team, today is your Exhibit A for winning your case against them. The next Champions League match got a lot scarier after this performance. There’s no way they can start Pranjic in the CL, can they? Also, I am sorry to the voters that I did not include Pranjic on the “Worst Acquisition of the Decade” ballot in December. A nomination is justified.

*I like Freiburg coach Robin Dutt: so often against Bayern, when a clearly inferior team comes to town and takes an unexpected lead, you have these meathead coaches bouncing around acting like they are watching an arm wrestling match. Dutt understands the game; you could tell by his reaction after his team took the lead that he was already anticipating the kind of pressure his back four would see in the 2nd half, and that one goal wouldn’t be enough.

*Louis van Gaal made lemonade today, plain and simple. I’m not sure there was any other more effective lineup he could have put out there. Tymo certainly didn’t have a bigger impact on the match once he came on. I dare say that if the regular back four had been playing, we’d probably have seen a match that went 0-0 until late.

*Not too upset about the Klose penalty non-call. Even if we’d ended up with a loss or a draw, that was just too close to say it couldn’t have gone either way.

*I don’t think you can read too much into this match. This is the kind of match that championship teams win. Just grind them up and spit them out. This team is what it is, it never starts off well, and takes a while to figure out how to find the chances. With a select few exceptions, this is how it has gone against good teams and bad. What they need to do this week is rest up. Whatever the dip in quality, there really has only been a minor dip in results. Let’s remember Schalke lost at home to Freiburg. And right now, that’s the difference.