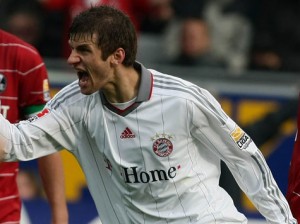 Saturday will simply be a match you don’t want to have the club look past, as 1st place FC Bayern Munich take on 17th place SC Freiburg. The match will kickoff at 12:30 p.m. Eastern time in the US, and will be carried live on GOLTV in the US and Canada. Setanta Sports Australia will have live coverage at 4:30 a.m. in the east on Sunday. UK viewers can watch a delayed broadcast at 21:45 Saturday night.

Nothing Nice to Say

When Mainz was coming to town, coach Thomas Tuchel joked that he would park the team bus in front of the goal to restrain Bayern. Freiburg’s Robin Dutt might also like to try this trick, but Freiburg’s bus would probably already has all its windows busted out along with corroded body work through which the ball could easily pass through. Let’s start with the very bad for Freiburg: They’ve gone 11 matches without a win. In the last month they’ve lost at home to Hannover 96 and Hertha. They’ve scored 4 goals in 8 matches in the new year, none of them in the same match.

So the recent past makes prospects dim. How’s the more distant past? Maybe history is on their side? Not exactly. In 10 all-time Bundesliga visits to Munich, Freiburg have never won. Optimists may try to find solace in the fact that Freiburg has never lost at the Allianz Arena. You’ve probably already figured out why: this will be their first visit there.

The fact of the matter is, after a reasonably competent start to the season, Freiburg has really been exposed as a team that just isn’t Bundesliga quality. Can you really name one player on the team? Okay, you might have heard of leading scorer Mohammadou Idrissou, who has been on Schalke’s radar as an inexpensive add up front, but his best seasons always come in the 2. Liga. One guy you will want to watch for is Felix Bastians, as he has played pretty well for Germany’s U21 team lately. Although he’s more naturally a left back, there’s no telling where he might line up. With two central defenders injured, Freiburg will probably shift either Bastians or captain Heiko Butscher inside for this one.

Out for Bayern are Martin Demichelis (shattered face, currently looking for a way to drink an empanada through a straw), Mario Gomez (calf) and Bastian Schweinsteiger (suspended). Klose and Tymoshchuk are the presumed replacements for Gomez and Schweini respectively. Diego Contento came back to training for the first time on Thursday, and could be ready to go at left back. It seems kind of unfair that David Alaba would have to go right back to the bench after his nice showing on Tuesday. It probably wouldn’t be a bad idea to rest one half of Robbery, or play one per half, so perhaps Alaba will see time on Saturday in a rotation like that.

A possible mitigating factor, crappy weather continues to prevail in Munich. Saturday night looks like it will be rainy with significant winds, temperatures a couple degrees above freezing. With the match starting in the evening, there is the chance for a snowy affair as temperatures drop.

In my opinion, at this particular moment, Freiburg is the worst team in the Bundesliga. They’ve allowed 47 goals, and no team has allowed more (Hannover is tied with them for the dubious lead). Don’t be surprised if they hang in for a little while: They’ve allowed 28 of those goals in the 2nd half of matches, so seem to be able to manage some first half cohesion at times. And don’t be surprised if you’re bored senseless early on; Freiburg have only allowed 4 of those 47 goals in the opening 15 minutes of a match.

For Bayern, the formula is very simple: don’t get lazy or complacent, take the opponent seriously, and the earlier you can get a goal, the easier of a day it will be. Leverkusen and Schalke clearly have the more challenging home matches this week, so there should be plenty of motivation to try to open up some more daylight. I don’t really have much doubt that Bayern are going to sock this one away pretty easily.