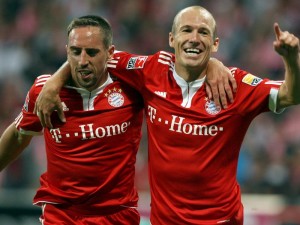 VfL Wolfsburg had the unlucky fate of being the first team to face the Ribery-Robben express in the fall. That didn’t go too well, as Robben netted twice, and Bayern won 3-0. Most teams have dodged one or both since, but not the defending champions as FC Bayern Munich head north to the Volkswagen Arena in search of their eighth straight Bundesliga win on Saturday. The match will air live on ESPN 360 and ESPN Deportes at 9:30 a.m. Eastern in the US. In the UK, ESPN will show the match on delay at 21:30 Saturday.


Nothing to howl at

When you look at Wolfsburg overall, they have one obvious problem: defending. They’re tied with Freiburg and Hertha for most goals against in the league (39) this season. Ok, do I need to go into a lot more detail when you know they’ve given up as many goals as Hertha? They’re on an 8 match winless streak, and haven’t won a league match at home since October 18. No wonder Magath-replacement Armin Veh got the heave-ho a couple weeks back. They have one key injury, and that’s keeper Diego Benaglio. However, backup Andre Lenz has been competent thus far. Karim Ziani and Obafemi Martins (African Cup of Nations) are available again for selection.

In my judgment, Wolfsburg’s got 3 key players under-performing, and that’s what is driving their current slump. In the back, it’s Marcel Schäfer. Here’s a guy who impressed enough last season to get significant time with the national team over the last year. This season, he’s a defensive liability, and the help he provided last season in the offensive end (7 assists) is gone.

Former Bayern amateur player Zvjezdan Misimovic was really the engine of that Wolfsburg offense a year ago. For all the sheer skill and beauty of the forwards, Mismiovic ran the show, something he had done very much under the radar in Bochum a few years earlier. He had a brief tour with Der Club, where he was forced to take on more of a scoring burden, since that team had no forwards who could find the net (and got relegated as a result), so Magath restored him to a role where he’d played his best football, and did he ever. He started out really well this season too, but I think he may be the player who suffered the most under Veh. He’s got too much skill to stay down for too long. Finally, Grafite has been in terrible form. Your guess is as good as mine as to why. He probably just wants to get out there already.

Wolfsburg caretaker coach Lorenz-Guenther Köstner has been around the block a few times. He was even the boss for Unterhaching when they helped Bayern to the title in 2000. That’s why I couldn’t understand why he stated he “saw improvement” in the Wolfsburg defense last week. True, it took a last gasp goal from Piotr Trochowski for HSV take a point from the match, but Wolfsburg essentially got broadsided the entire second half. It was much more a case of HSV being incompetent than Wolfsburg being competent.

Much has been made in the media of recalling last year’s 5-1 humiliation, but the fact of the matter is that Bayern have played poorly in Wolfsburg for years. They haven’t actually won a match there since March 2005. In 2006, a 1-0 early season loss in Wolfsburg signaled that Bayern was weaker than in previous seasons. In 2008, Bayern played one of their worst matches of the season in Wolfsburg, limping to a 0-0 draw. That time around though, the circumstances were a bit different: all could be forgiven as the single point clinched the Bundesliga title, and dozens of liters of Paulaner spilled on the pitch seemed to make the Volkswagen Arena’s ground fertile for a title run in the following season.

Happier days in Wolfsburg; there was a title celebration there in 2008 too.

Bayern come into the match injury-free once again, although Franck Ribery will not start. Not really controversial, but the tabloids like us to think so. We’ve come to know Van Gaal, and this is how he handles things with players returning from injury. It’s just how it goes. Now, if Bayern had lost 3 straight, maybe the conversation would be different. But as it is, Ribery hasn’t shown many flashes yet; I think it’s a fine idea to play him 30-45 minutes again, and turn him loose in the Pokal match, in preparation for having him play 90 against Fiorentina. It’s been a quiet week of training, although maybe Demichelis will be bitter about Van Buyten getting a contract extension and cry about it before the match. Nevertheless, expect no changes in the starting 11.

This really has the makings of a wild match. Wolfsburg can’t defend, so Bayern will have a lot of chances even if they’re not particularly sharp. I refuse to believe that Wolfsburg will camp out in their own end and try to engineer their classic counter, though that’d be the wisest thing to do. For the Bayern defense, Dzeko is the kind of guy who will catch them with their pants down. He made something out of a nothing-long ball last week, and even if Grafite doesn’t feel like trying to weave through a Bayern defense anymore, Dzeko will find a way. In the end though, Wolfsburg just don’t have the back line to stay in the match.