The shape of the Bayern squad in future seasons has become clearer after the club announced the contract extensions of three key players on Thursday.


Daniel van Buyten, who joined the club from HSV in 2006 has signed a contract extension through the end of the 2011-2012 season.Although the club has publicly indicated their willingness to abandon the former policy of granting only 1 year extensions to players over 30, this contract represents the first tangible evidence that the promises were more than rhetoric. 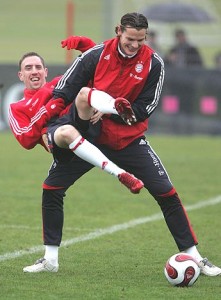 I’m happy for Van Buyten; he has certainly had his best season in a Bayern kit this season, and gone from background character to one of the team’s leaders. Outside observers should also not underestimate the significance of this extension with relation to Ribery. It certainly would have been a strike against the club if they had decided not to offer Van Buyten an extension, as Van Buyten is perceived to be Ribery’s closest friend within the club.

Thomas Müller and Holger Badstuber were also granted extensions, although their contracts were not due to expire. Müller, who had been signed through next season, was extended through 2013, while Badstuber is now signed through 2014. I think there will be very little argument that Bayern have done the right thing here, and locked up the future of the team for many seasons to come. It also sends the right signal to the amateurs coming into the team and to Toni Kroos who will be looking for an extension next season.

With Van Buyten’s deal done, it leaves Butt, Rensing, Görlitz, Altintop and Van Bommel as the 5 players whose contracts will expire at season’s end. Realistically, Butt and Van Bommel are the only ones who are going to get consideration here in my mind. I’d expect we’re going to see everyone else get their deal in place before the Ribery negotiations get underway.