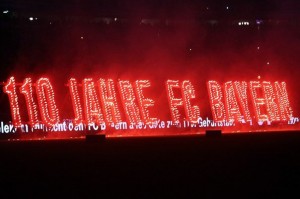 With 10 matches to play in the Bundesliga season, FC Bayern Munich has now taken over the top spot in the table following a 1-0 victory over Hamburger SV on Sunday. The victory essentially ended the title hopes of the visitors and allowed the home team to take a 2 point lead over undefeated Bayer Leverkusen.

Franck Ribery’s 78th minute goal was another demonstration of a superstar providing the difference in a close match: A little shake and bake from the outside in, getting just the streak of daylight needed and powering the ball in on the short side with surgical precision.


Thoughts on the Day:

A lot of plaudits are going to go to HSV’s defensive effort, which we can all admit was good–but this was the best defensive match that Bayern has played in some time. We’ve had two clean sheets in the new year before today, Hoffenheim and Mainz. But I don’t think either of those compare to the effort needed to shut down HSV, even with missing men. Lahm was particularly terrific–I was really impressed by the number of medium to long range clearances he had that were struck precisely. He might not have given the ball away once the whole match. I frankly thought he got a raw deal from the referee (a bit more on that later) on a couple free kicks given deep, but fortunately no damage came from them. Badstuber just does everything he’s asked, and it’s so easy to forget he’s not a 5 year veteran. And I’ve got to say, Micho had a couple bloopers (he’s thankful Trochowski did his best Van Bommel in front of goal), but he also looked faster to me today. He didn’t scare me that much, so that’s something.

*Getting Van Buyten back into the lineup is an important step, because there’s a subtle string of problems associated with his absence. First, we’re stuck starting Contento. I’m not going to whine about him really, I think for a very young player just getting his start, he’s doing fine. But, his inexperience is a deficiency that requires changes in our normal way of doing things. Schweini was definitely trying to hold Contento’s hand through today’s match, and that caused another problem which many of you have already commented on: it put Van Bommel on the ball even more, a situation most of us don’t like. I know I didn’t get all that excited to see Van Bommel leading the break up the middle a couple times, although I was surprised that he was moving pretty quickly. The additional problem it creates, is that it stymies the development of Badstuber and Ribery as a partnership. Even though Robben and Lahm have probably not fully exploited their potential together in attack, there’s definitely more of a threat there when Lahm pinches up.

*I’ve got another bone to pick with Louis van Gaal this week: He made the right substitutions, but at the wrong times. To me, this was a match where the Bayern goals were always going to be more likely to come off set pieces. Bayern probably didn’t earn as many as corners as they should have, but HSV was chipping away pretty good at them throughout. I really think that in the situation, Gomez and his heading ability should have stayed on, and the Olic for Muller sub would have fit at the time Klose came on. I felt kind of vindicated because in that 15 min or so that Klose and Müller were on together, Müller messed up at least 3 scoring opportunities by my count. Don’t get me wrong; I don’t think Muller was horrible (he wasn’t great either though). Then, with Schweini grimacing and limping in the final minutes, LvG subs Tymo on for….Robben. So, I really don’t want to hear about Schweini being banged up this week.

I’m usually pretty cool with Lutz Wagner as a ref, but it seemed to me that today he was totally arbitrary. Van Bommel deserved his card of course, but it seemed like maybe Lutz watched too much figure skating this week, and was whistling fouls based on the artistic impression of falling to the ground. And I have to say, HSV really had some artful dives. It wasn’t egregious, but it was happening. Hopefully Ribery studied, as his couple faceplants got no sympathy.

*Tell me you wouldn’t want Boateng on your team? He’s got growing up to do, but to me he seems fearless, and pretty nasty to boot.

*I’m going to let the fine members of the Munich press corps let us know what exactly was up with the Ribery-Alaba goal celebration. I haven’t found a good account of it yet, but expect to see it in this space tomorrow.

*I’m going to make a little prediction here: I may be totally wrong, but I have a theory. Mark van Bommel was really happy today. On at least two occasions, he gave a smiley pat on the back to an HSV player after a foul, and I didn’t see him trying to blow his nose on anybody even once. Check out the very end of the full highlight video, he’s even goofing around with Berni! What we he have to be so happy about? I think we’re going to hear about about a contract extenstion in the next 24-48 hours..