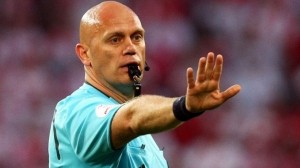 If there’s one thing we can all agree on, it’s a very basic principle: the players should determine the outcome of the matches. Unfortunately, that did not happen this evening in Munich, where the officials determined FC Bayern Munich a 2:1 winner over ACF Fiorentina. You’ll find today’s goal videos at the end of the post.

The psychology of these situations is fascinating to me. The comment section of this post speaks for itself. I ask the embittered Viola fans: How can the club which gained the advantage be at any fault whatsoever? Should Miro Klose get down on his knees and beg the linesman to raise the flag a full minute later?

Believe me, I’m pissed that I have to sit here and write about asinine officiating, especially when it was so clear from past examples that this referee was not up to the challenge. Even I could see the potential for problems: I don’t normally spend an entire section of the match preview on the referee, but in this case, I thought it was warranted.

But I would kindly remind our unfortunate opponents that they ought to be directing their rage at UEFA and Mr. Platini, who clearly do not take seriously their responsibility to ensure the fairness that all sides expect in a competition of this magnitude, when they allow officials with the history of Tom Henning Øvrebø to once again take to the pitch. I hope that Fiorentina fans will be among those most vocal in asking for reform in the way UEFA handles officiating assignments.

But, I’m not going to sit here and apologize or feel bad for Fiorentina. Bayern Munich have continued a tremendous winning streak and will head to Toscana with a 2-1 advantage. And how many people are going to type “Bayern Offside” into Google in the next day and a half? So, a welcome to our many, many new readers!

Yes that’s right; This blog actually had the foresight to call itself Bayern Offside

Observations on the day

*Daniel van Buyten is said to have a tear in his calf muscle, and is expected to be out 10 days. Frankly, I didn’t witness how this happened at all. When I saw Contento coming on, I actually assumed it was going to be for Badstuber, who I thought could really have been severely concussed by an elbow to the back of the head late in the first half.

*This was the sloppiest match Bayern have played this calender year, and perhaps the sloppiest match in quite some time overall. I simply can’t remember the last time we played this many speculative long balls or dumped away easy passes with such frequency. Take away Ribery and Robben and you really did have the team that slogged through scoreless draws earlier in the season.

*What can you say about Contento? An absolutely ballsy sub from Van Gaal, who had all kinds of players with more experience available on the bench. It looked like a terrible mistake when Contento whiffed on a corner clearance he has to make, which led directly to Fiorentina’s goal. Just unfortunate that it occurred so early on in the 2nd half, because he really seemed to find his stride as the half went on, becoming much less of a liability. He laid in a lovely cross later on which would have been a goal for Bayern in almost any other match during the win streak.

*Olic for Müller was an obvious choice, as Müller really had one of his weakest matches in a while, but I’ve really got to question taking Gomez off for Klose in that same spot. There’s really a danger of the whole 20/20 hindsight here as the sub occurred before the Gobbi red card, but when you already have Van Buyten out of the match, isn’t there some consideration to be made about what you’re going to get out of your set pieces with Gomez off as well?

*It seemed to me, more than anything else, that Bayern were playing in a fashion that indicated they were really accustomed to the pace of a Bundesliga match, and were not readily adjusting to the pace needed on this night. That certainly is not to say that Ribery and Robben couldn’t outpace Fiorentina’s defense, which they did with regularity, but the passes to get them moving were slow developing, and the recipients of the passes off their runs were slow in taking their chances.

*If you wash out all the officiating nonsense (which is close to impossible, but consider it), I think the right result would have been a draw. Fiorentina certainly generated enough pressure in the early going to make a goal seem deserved, and like most matches, Bayern seemed to strengthen as the match went on, and would have been the stronger finisher on most any scorecard. But there can’t be any question now that we’re seeing a decline in form, and we’ll have to hope that it bottoms out before we visit Italy and a team that will have more than a few chips on its shoulders when we arrive.