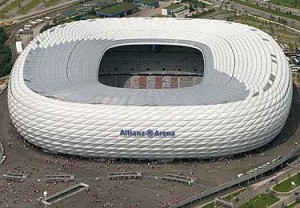 FC Bayern Munich will try to keep the renewed momentum going in the Champions League on Tuesday, hosting Romanian side CFR Cluj at “Fussball Arena Munich”. Kickoff is at the customary 2:45 p.m. Eastern. Without DirecTV’s full Champions League package, this one is pretty much a broadcast blackout in N. America, so you’ll be wanting to look for your favorite streams early. Bayern Offside will provide a fan chat beginning before the match to try to get you up to speed on that and other news.

Limping Along With You

As spelled out by the club on Sunday, the current injury status is as follows:

“All But Certain”: Schweinsteiger

Van Buyten and Olic reportedly did not train with the team on Monday, so I would have to doubt that either one of them would make it into the starting 11. Therefore, my lineup projection only shows one change. Obviously if Louis van Gaal has confidence in a healthy Daniel van Buyten, then Tymo will move into the Ottl spot. A Pranjic-Schweinsteiger pairing in midfield with Braafheid at LB is also not out of the question.

*Don’t forget about Mehmet Ekici like St. Pauli did. The on-loan Bayern midfielder scored his first career Bundesliga goal for Nürnberg over the weekend, but it wasn’t enough as St. Pauli took the points 3-2. Ekici had previously scored for Nürnberg in their opening round DFB Pokal match. He has also tallied assists in both of his last two matches.

*Two Müllers for the price of your daily calcium


*While winter transfer speculation runs wild (and is thus far, probably only realistic concerning Demichelis), Bayern is giving trials to a couple young midfielders this week. Iceland’s 21 year old Jon Gudni Fjoluson, who made a big impression against Germany’s U21 team will be given a look. But he almost seems too old for Louis van Gaal, doesn’t he? Enter 16 year old Ylli Sallahi of Austrian side Kapfenberger SV Superfund. Little is known about the young midfielder except that his name looks like it’s missing a letter. Kronen Zeitung reports Sallahi will test for four days in Munich, and perhaps he will be the next Austrian wonder boy in the Bayern youth set up.

*The club is now projecting Contento’s return this Friday at Hamburg, while Ribery and Klose could be in the squad the following week against Freiburg.

*Friday’s Hamburg-Bayern match is likely to be on ESPN 3 only. The current ESPN Deportes schedule shows that they’ll be going with a replay of an MLS match in that time slot.

CFR Cluj’s Champions League season thus far has been respectable despite crisis conditions in their domestic league play. An upset win in Basel followed by a tightly played defeat against Roma leave them 3rd in the group, with at least a reasonable shot of maintaining that position. However, in Romania’s Liga I they currently sit 11th with only 1 win in their last 5 matches. They’ve already dumped one manager, and replacement Sorin Cârţu is now feeling the heat himself. This past Friday, they visited FC Vaslui who (tell me if this sounds familiar) were missing 8 players due to injury. Cluj lost the match 5-3, but statistically, it wasn’t a surprise: they are winless in 7 away matches across both competitions this season, and 5 of those matches have ended in defeat.

The lack of improvement in the league has caused management to take austerity measures against the players. A Bucharest daily reported on Sunday that each Cluj player would be fined €2000 upon their return from Germany and furthermore, their wages would be frozen until Cluj broke into the top half of the table. That last part is more bark than bite, they’re currently only 1 point away from that. But, it sort of makes you wonder whether there’s going to be a scramble among the Cluj players in the post-match shirt exchange, as a Bayern shirt auction might be in order if they plan on eating for the rest of the week.

Culio is a small (5′8″/1.74m) but dangerous midfielder on the left for Cluj. He’s probably their most talented play maker, although he is not much of an actual scoring threat himself. The one exception to that was a brilliant Champions League night he had in Rome two seasons ago when he scored both of Cluj’s goals in their upset victory against AS Roma. More recently, his skills were greatly in evidence against Basel, where he set up both goals, one from a corner. Culio is also highly regarded for his tremendous stamina, and he will likely rival any player on the pitch in distance covered tomorrow night. Expect to see some interesting one on one duels between Culio and Lahm, as Philipp introduces him to a Bayern Paradise.

*While Culio represents the short of things, Cluj has plenty of height in the area. That’s because their 20 year old Ivorian striker Lacina Traoré stands an immense 2.03m/6′8″.

*2009-10 Romanian defensive midfielder of the year Gabriel Mureşan will miss the match for Cluj along with left back Edimar.

While Cluj always seems over matched on paper, they have consistently given European opponents a rough ride, and have pulled the occasional upset over the last few years. It may be tempting to predict a goal parade like the Sporting match of a couple seasons back, but I do think Bayern will have to work to overcome the challenge.