Did Saturday just get easier or harder?

Share All sharing options for: Did Saturday just get easier or harder? 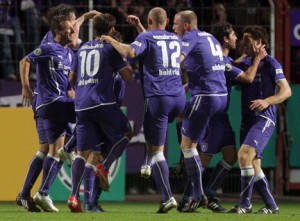 First, just a little aside on the DFB-Pokal: what a tremendous round 2. The Pokal certainly doesn’t seem to get much international respect, and a lot of German fans can’t be bothered with it either it seems (even the Allianz Arena was only a bit over half full on Tuesday), but I love it. It’s kind of the NCAA tournament grafted onto the Bundesliga, and it’s the one event for which I really love the “Konferenz” feed, especially on Wednesday, where 36 goals were scored in 8 matches (not even counting two rounds of penalties), and it seemed like they were scored at about regular 3-4 minute intervals. 8, count ‘em, 8 upsets in 16 matches. And with the likes of 1860, Augsburg and Fürth still standing, even an away match in the next round could be a welcome short and comfortable journey. Of course, by pointing that out I have tempted the fates to draw us against Bremen or Schalke.

The match to pay particular attention to on Wednesday was Osnabrück vs HSV, which ended in triumph for the Dritte Liga side after penalties. It’s been a pretty bad week for HSV. They get torn apart by an Austrian team, and only managed a Ze Roberto goal (and let’s face it, we know what leaning on Ze Roberto for goals is like–it’s an unexpected pleasure but not a route to the title) in an uninspiring draw in Frankfurt. And now this Pokal disgrace.

Suddenly, Saturday becomes a version of “Will the real HSV please stand up?” Although I’m glad to see what I consider one of three serious title challengers to Bayern bumble along, I’d rather see them bumble against *my* team. We may now be faced with a team circling the wagons..or circling the tugboats, (or whatever you circle in Hamburg), to bring an even greater focus to a match which they already had circled on their calendar. It’s kind of unusual to be top of the league and have your back feeling the cool steel of the wall ever so slightly, but that’s were HSV sits. And I don’t know if I like that, I don’t know if I like an admittedly strong side digging for something extra against us.

But on the other hand, the pressure is clearly all on HSV. That’s really not the way we’d have read it just a couple weeks ago. I think Bayern are moving from just being good to being fun-good. Ok, I kind of have a hard time defining what fun-good is. I guess I would say it has something to do with stressed carelessness being transformed into confident carefree-ness. And fun-good and Bayern-Dusel seem to directly correlate. I don’t think our new group scares easily. So perhaps we’ll benefit from an HSV that is just too tightly wound and stressed out by the magnitude of what the match could mean. I can’t really make up my mind where and how the mental match will be played. But tomorrow, I’ll get into the raw data side of things.

Hamburger SV vs. FC Bayern Munich will air live on GOLTV at 12:30 p.m. EST on Saturday. What do you guys think about a liveblog for the match? I think this is one where I might really want to be focused in on the action, but I am greatly enjoying the interaction we’re having too.