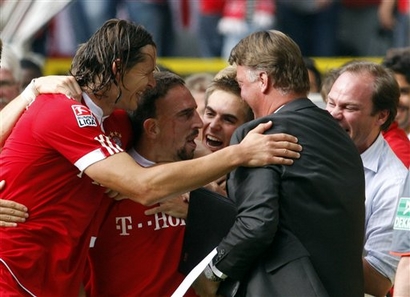 First of all, I just want to give a huge thank you to Luke who is covering the blog brilliantly. I am having some health issues with my family which is taking me away a lot so my time has been limited. Thanks to Luke, the blog hasn't suffered. Bayern walked away with their first win since 2005 in Dortmund and also put an end to the BVB's 15 game winning streak.

I still have some concerns about the team, but things were a little better today. Tymo holds onto the ball a little too long. Daniel van Buyten had the best game of the season once he settled in. I thought for sure that Zidan was going to create some problems for him, bt once he settled, he had a magnificent game and this made my DvB loving heart swell.

Mueller was absolutely brilliant. Schweini had a shining moment in which I was reminded why I use to think he was so brilliant. He has struggled, but has been trying is hardest to get the ball to the back of the net. It finally paid off for him.

I still don't think that Lahm is Captain material yet. van Bommel would've had a lot of direction or yelling in the first, but let me say that I do think Schweini is capable of leading the team and getting them in gear - as witnessed by the leg step. And not getting carded to boot. Butt is sometimes too aggressive, but I think I prefer that over the passiveness of Rensing. At least he comes off his line and isn't afraid to say something to the team.

The attack on van Gaal after Ribery's goal is hopefully the start to ending the dull roar of all the accusations of dislike, discontent, etc with one another.

The first 20 minutes of the game were a bit rocky, but after that Bayern stepped up and gave a great performance. Sure, there are things that I could pick on, but I'm hoping that this is a step in the right direction because they clearly wanted to win today. Overall, I'm pretty satisfied with today's match and Bayern deserved all 5 goals that they got. I'm sure I left something out as I had so many different thoughts on this game, but there was so much going on. I can't wait for a lot of the images to come out for this game!