The boys in red head to Signal Iduna Park to face Borussia Dortmund at 9:30 a.m. EST Saturday. Despite good success at home (two 5-0 pastings over the last 4 years) and neutral sites (the 2008 German Cup victory), Bayern have not defeated BVB in Dortmund since December of 2005, a match notable for the fact that Ali Karimi actually scored a goal.

This week’s match presents a good opportunity to break that streak. Dortmund captain Sebastian Kehl will miss the match due to injury, and rebound-prone keeper Roman Weidenfeller will deputize. Also, Kuba is a question mark after an injury sustained in a qualifier for Poland. If he can’t go, it will definitely take a bite out of BVB’s attack against Bayern’s left. Tinga will return to the defensive midfield, likely pushing former Bayern product Mats Hummels to the bench.

For Bayern, Miroslav Klose will not make the trip, a somewhat curious decision that to me at least, is not entirely explained away by his “needing fitness”. Van Bommel, Demichelis, Toni and Görlitz are out for Bayern, although Toni did resume practice on Thursday. Görlitz, who was expected to be out a couple of weeks, may not be as severely hurt as originally thought. However, this info probably only matters to Mehmet Scholl as LVG seem loathe to use Görlitz in any capacity.

Dortmund has really only played well in one match this season, and that was the opener against a very shoddy looking Cologne squad, who did them a favor by putting the only goal of the match into their own net. They’ve consistently trailed their opponents in possession time, and have done little with what crosses they have connected on. Dortmund does however, tend to win more aerial duels than most squads, a relative strength that Bayern will have to look out for.

Although it will be fun to speculate whether Robbery will start the match and how exactly they will slot in, I am expecting we won’t get a bigger dose of Franck on Saturday. 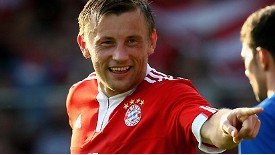 The hard charging Olić ought to be able to twist Owomoyela into corkscrews all day, if Franck doesn’t. It was clear that Owomoyela was out of his league trying to handle Eljero Elia against HSV a couple weeks back. I look for the Bayern midfield to exploit either an inexperienced Kevin Grosskreutz or a hobbling Kuba and push the attack up the left to Olić. With Mario Gomez likely to face a physical battering in the center, and Arjen Robben likely to be swarmed at every opportunity, it will be Olić’s relentless pushes that should carry the day.

It’s a tough thing to win in Dortmund, especially for a team carrying some tired legs after an international week, but Dortmund’s problems outweigh Bayern’s at the moment, and two goals will be enough to win this match. I expect a very chippy, foul-ridden affair, but our quality should shine through.

Note: I will have to skip the live blog this match. I just can’t be certain that I’ll have working internet from the place I’ll be watching the match. I will try to confirm whether we’ll be up with the liveblog for the Champions League match as soon as possible.