Share All sharing options for: Letter to the board-The Bayern Offside View 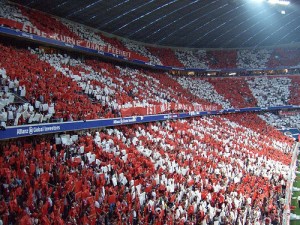 I wanted to take a little bit more in-depth look at the now-famous Transfermarkt letter. Ok, it might not be that deep, but it’s easy to just nod and admire its craftsmanship, despite the fact there’s much to debate in its content.

Section 1.1: A lot of the background here is not necessary for even a casual fan of FC Bayern. But what the authors fail to touch on, is that going into last season, management had hoped to squeeze one more season out of Sagnol at right back, but injury intervened. Some argue that the Jansen sale was a bizarre moment, dumping someone that could have filled that position–but I have always felt the acquisition of Jansen was a hedge in case Lahm decided not to sign a contract extension. And after the Zenit matches, who really wanted to see Jansen in our defense ever again? The time since has kind of shown Jansen didn’t belong back there in the first place. So, I think with regards to last year at right back, the cookie crumbled badly. Management did what they could in acquiring Oddo on loan, and clearly he wasn’t up to the task. However, it is a more egregious oversight this season, but it seemed to have been the intention to put Lahm on the right all along. I think the authors are a little overzealous in declaring the class of Edson Braafheid after a total of 96 minutes played in the Bundesliga. That’s not to say I expect he will be one of the great all-time defenders, but I don’t see how his grade can be anything but incomplete. The authors interestingly save their strongest criticism for the signing of Breno, while curiously not mentioning him by name. What is conveniently forgotten by the authors re: the transfer price for Breno is that it was simple market economics–there were several big clubs from Italy and England hot on the trail, and Bayern made a courageous move outbidding them all. Whether it was actually Dutch courage remains to be seen. I personally am not ready to declare Breno a failure at age 19yrs 10 months. The authors may be right–but I think it’s still too early to tell on that one.

1.2 Goalkeeping: You know, the one name they overlook who was apparently very close to coming last season was Mark Schwarzer. He would arguably have been better than anyone on their list. I think it’s a pretty good analysis, but this particular problem, i.e. filling the shoes of a legend is not a problem unique to Bayern, nor easily solved by most any club.

1.3 Midfield: I think the problem is, no one knows exactly what they have with Schweinsteiger. He is truly a riddler, and it does make things difficult. There was definitely a time late in in the 07-08 season, where he seemed to have grown up, he seemed sharp, and he played that way right into the Euro. And then he just becomes invisible again. The authors argue hard for bringing in Sneijder and van der Vaart. Leaving Sylvie out of it, I’m not convinced it’s an improvement.

1.4 Louis van Gaal: The authors clearly come out against LVG’s preferred tactical approach, on the rationale that he does not have the players to fit those roles. We’ve had something of this debate on this in our comments over the last week, particularly vis a vis Ribery, and the counterpoint to this was vividly described by reader Juliet. I just happen to agree with her, and I am not really sure why the authors are convinced that Ribery as a “10″ simply won’t work, when it has more or less not even been attempted yet. As for the van Bommel/Tymoschuck conundrum–none of that can be laid at LVG’s feet. If Klinsmann had survived, I’m quite sure van Bommel would not be in Munich now.

1.5 Vitriol against Schweinsteiger: This section seems to be about authors’ personal disappointment that Schweini wasn’t give the heave-ho long ago. Not much to add here.

1.6 Transfer policy: The authors criticize the board for being too “prideful” in their dealings and seem to indicate they would have favored selling Ribery if van der Vaart, Sneijder and/or Robben would have made their way to Munich. Personally, I don’t think things will every quite be the same with Franck after his sending off against Schalke last season. I felt he quit the team in that moment, and now he’s just playing out the string. But, the authors need to be reminded that it is more than just semi-delusions of grandeur that drive Bayern’s transfer policy. Let’s remember why Ribery was brought here in the first place: to replace Michael Ballack. And the failure of management to properly fill the hole when Ballack left in 2006 is the reason we fell into the UEFA Cup in the first place. So, I can’t fault management for keeping hold of one the world’s most exciting players, while also trying to avoid a mistake they previously made, even if they never acknowledged it.