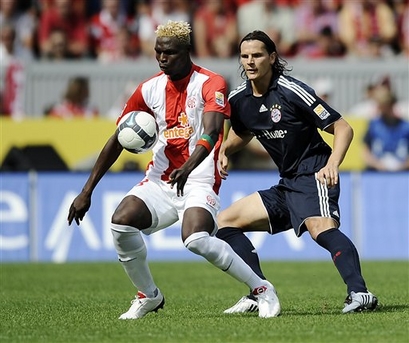 Somewhat reminiscent of the game in Mainz in 2006. Though a very disappointing result. However, Mainz deserved this win much more than Bayern. They clearly wanted it more. The first half was a nightmare. I don't have anything good to say about anyone until Mueller came on and Olic as well. Why Olic isn't starting games is completely beyond me at this point. I am not at all impressed with Tymo. I still don't have faith in Lahm being Captain. In the event that he was needed, it was Schweini that was arguing and Lahm was nowhere to be found.

There were a lot of mistakes by all parties in the first half. Rensing included. The announcers had said that he's got a lot of talent, but is lazy as a goal keeper. I'm not sure that I have a valid argument for disagreeing with that. I keep hoping that he will prove me wrong, but I continue to see no reason that he's deserving of the number one spot. I know he hasn't had much opportunity to develop but not even bothering to move from your spot when the ball goes to your right really makes disgusts me. The score in the first half really should've been 3 or 4 to 1.

Müller is the reason that Bayern takes back a point to cut the lead in half at the beginning of the second half - though he's not getting credit. It's being called an own goal, but from what I seen it looked like it was all Müller. This kid continues to show his worth to the team. There is talk of him going on loan to another team, but I think he continues to prove that he wants to stay with the team. I'm not sure that he'd get regular playing time if Altintop actually starts to play like he's capable, but it's been proven that he's reliable and dependable in a clutch.

Mainz did a lot of attacking and have had some great passes. And let's not forget that beautiful bicycle kick in the first half by Bance. An offside call takes away a goal opportunity by Bayern, but at least they appeared to have wanted to play a little bit more in the second half. There was a great cross from my guy, The Belgian Bull, but it was for not as no one bothered to try to do anything with it. That seems to be the MO today as Müller put a beautiful cross over when he first came on in the first half, but no one did anything with that either.

I keep trying to remind myself that perhaps the team needs some time to gel. That they're are several new players that have never played together and they need to find a rhythm. However, that only suffices for so long and I think we're starting to get past that point. Missing key players doesn't help the matter any, but it's going to happen and the team should be able to function without them.

Olic nearly ties it up with a header, but its deflected off the post. Olic and Müller have been fantastic this second half. And another great chance for Müller, but he's denied by Mainz's Müller. H. Müller has had a fantastic game for Mainz as well. He made some brilliant saves.

There was an opportunity for a penalty kick in which Sosa kicked it over the bar. I don't care too much for him as a player, but that probably shouldn't have gone as high as it did. There were opportunities in the second half for Bayern to tie it up, but they weren't able to capitalize on much of anything. T. Müller had an excellent game.

As a random aside, I think if you're going to be an announcer for any sport, you should have to say player's names correctly. It makes me cringe every time I hear van biten. He's not the only one they butcher on the team. I'm just saying - if you're going to announce, learn the proper way to say all the player's name's. Please.

The announcers talked a lot about the missing van Bommel and the things that were missing from the match since he wasn't around - so see, it's not just me. I really don't have a whole lot of positive to say about this match. Aside from T. Müller and Olic. Mainz deserved this victory. H. Müller and Bance were definitely the men of the match.

And on a completely different note, I'd like to wish a huge get well and hopeful recovery to West Ham United's Calum Davenport who was stabbed, along with his mother, on Friday night. Davenport underwent surgery and is in critical condition. His mother is recovering from her injuries.