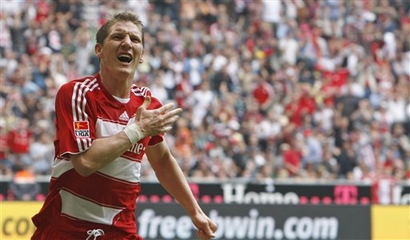 Today Bayern will take on M'gladbach without the likes of Franck Ribery and Tim Borowski. Both are serving a suspension this match. Captain Dutch is wearing a black arm band in honor of the folks that died during the the attempted attack on the Dutch Royal Family. Butt remains in goal. Schweinsteiger is back in the line-up as well after missing last week due to injury. This pleases me considering how solid he has been.

Ze Roberto sends in a nice cross and the lovely Captain Dutch has a nice header, but its sent over the bar. It is amazing to me how much ground Philipp Lahm covers in the course of the game. Bayern need someone to compliment him on the other side though.

Nine minutes in, Lukas Podolski takes on heck of a shot that just misses slightly wide. He gets a pat on the head from the Captain for a nice effort. Some time later he tries once more and just misses over the cross bar as well. He's trying at least.

Demichelis is making a lot of mistakes. I think it's time for him to sit on the bench for awhile until he can get it together. This is shamefully ridiculous. Christian Lell is very weak on the right side. I don't understand why he continues to get playing time. I know that Oddo isn't much better, but I'd take him over Lell any day.

Ze Roberto is overturned and a yellow card is issued to Roel Brouwers. First yellow of the day. Daems almost scored an own goal. Lucio almost makes a goal himself, but its off the goal post after the corner. Luck was on the side of M'gladbach this time.

Bastian Schweinsteiger puts Bayern in the lead as he scores goal number five of the season. Luca Toni puts a great cross over to Schweini who is able to capitalize and find the back of the box as he's sliding on the pitch.

Jorg Butt gets ahold of a M'gladbach player and they are awarded a penalty. The skipper Filip Daems takes the shot and is able to score, bringing the game to a tie 1-1. Evidently even Captain Dutch doesn't trust Lell on the right side as he's playing a little farther up and on the right a little more often than he's playing in the middle.

Hamit Altintop puts Bayern back in the lead, 2-1, with a gorgeous goal at 41:50. That shot was taken with much more confidence than I've seen him have as of late. Perhaps having his former coach around has been good for him.

In the second half, Massimo Oddo comes on Christian Lell. That is the only change at the half for either team. Podolski is taking a lot more chances this game than I've seen him take all season. Granted, they're not finding the mark, but at least he's giving it some effort which is more than I can say for most of the season.

Bayern have quite a few chances, but M'gladbach's keeper is on spot and stops them from going in. Luca Toni was delivered a great shot from Ze Roberto, but once again he capitalize. It was an easy header that should've found the mark, but it didn't. Massimo Oddo has a great run and puts the ball right through to Toni and he doesn't follow through again. Oddo was clearly frustrated by that.

The team seems to be playing with a little more fire. There are still some critical tactical mistakes that need to be cleaned up, but they seem to have a little more of a spark today. Marko Marin comes on for Jan-Ingwer Callsen-Bracker. He makes a corner and has an excellent delivery, but no one capitalizes on it. Bradley has a great header, but it sails just high over the bar.

Bayern also decide to make a switch and bring Thomas Muller on for Podolski. While they're at it, M'gladbach makes the swith to Oliver Neuville in place of Tobias Levels. Bayern decides to make their last switch as well, bringing on Andreas Ottl for Hamit Altintop.

For the second time, Ze Roberto is taken down and a yellow is awarded to M'gladbach to Paul Staleri. He has to be helped off the pitch at that time and is being helped by the team doctors. Another yellow card is given to Karim Matmour, his fourth, for a foul against Mark van Bommel.

823 days after his last match as a manager, Jupp Heynckes takes Bayern to a victory against Borussia Monchengladbach.