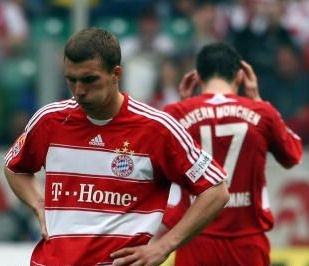 Bayern took on VfL Wolfsburg today; matching up against their former coach, Felix Magath, once more this season. In the defense, Lucio and Breno will start due to an injury to Martin Demichelis. And as previously mentioned, Daniel van Buyten is absent due to family matters. Lukas Podolski once again makes the start in the absence of Miroslav Klose.

The announcers gave a shout out to van Buyten. He said that Daniel has been replaced by Breno because his dad is poorly and so he's in his hometown currently and that if anyone is listening that knows Daniel to please wish him well and let him know that we all hope for a speedy recovery for his dad.

Captain Dutch kicks off the match the only way he knows how - with a yellow card just two minutes in. This is his 7th of the season; 2nd since serving his previous suspension. Luca Toni attempted to score the first goal at 14:45 while doing a back roll and it would've been lovely if it had gone in, but it just missed. It would've been a brilliant goal if it had found the back of the net.

At 22 minutes, Wolfsburg had a brilliant chance and their player was virtually all alone, but excellent defending from Philipp Lahm of all people keeps Wolfsburg from scoring. Rensing might've been in trouble had that one made it passed Lahm.

Lucio is awarded the second yellow for Bayern for arguing with the ref evidently. I didn't see him say too much when he was injured, but evidently what he said was more than enough and he was awarded the yellow card while being helped off the pitch. Maybe it wasn't how much he said, but what he said instead?

Wolfsburg take the lead with a quite brilliant header from Christian Gentner. Bayern's defense was nowhere around and Gentner made that one look incredibly easy. However, Bayern respond with a goal of their own by Luca Toni. Lucio started it, but it was saved and then Toni took the rebound at which point the goal keepers hand was inside the line and therefor the goal was given. What an exciting end to the first half.

The second half kicks off with a Luca Toni yellow; his third of the season. Aside from the few moments of excitement at the end of the first half, this game has sort of been a mess. I'm finding it a bit boring and hard to watch. Mark is doing what he does best and coming to the defense of his team all the time. Bastian Schweinsteiger got fouled and it didn't get called so Mark just sort of followed on down the pitch till the ball went out and had a few words with the player that fouled Schweini. Bayern might consider changing their name to Mad Mark and His Funky Bunch. ;)

Wolfsburg take the lead 2-1 on a brilliant delivery from Schofer to Edin Dzeko who took the ball to the back of the net bringing that to a total of 32 goals in 41 appearances for all match types. And as if that weren't enough, he sealed the deal with one more goal almost immediately after the last goal. Two goals by Dzeko and you can certainly see why the football world is paying attention to this kid. He's scored ten goals in the last eight Bundesliga matches.

Andreas Ottl is brought on for Lucio. Odd move this one because Breno is the one that is stinking up the defense this match. Rarely would I take sides with Lucio, but I certainly think this wasn't the best choice as Lucio has had a pretty decent game considering Bayern were pretty much a mess for the entire match. Breno was terrible. Podolski was pretty non existant. Schweini had a good match again, but his and Philipp Lahm's strengths have gone unnoticed because the rest of the team has been a wreck.

And the train wreck continues. Wolfsburg's Grafite scored with Breno doing nothing once more bringing the score up to 4-1. However, a huge mistake by the lot of Bayern, Rensing and the entire team Grafite scores again to bring the score to 5-1. Bayern are taking a beating and a much deserved one at this point. They're not even trying to stop Wolfsburg.

Poldi scored, but he was offside so it didn't count. Not that it would've mattered at this point. Tim Borwoski comes on for Philipp Lahm. Leaving Breno as the only defender and a bad one at that. He has been absolute rubbish today. If they play like this in the CL, Barca will walk all over them.

And the slap in the face continues by Wolfsburg when they pull their number 1 keeper and let the back up guy come in. I'm not a fan of Felix Magath, but this was a rather cheeky, brilliant move on his part. Quite a brilliant gesture by the former Bayern Boss. Way to rub a little more salt in the wounds.

What a horrible game for Bayern. Thank goodness that's over.