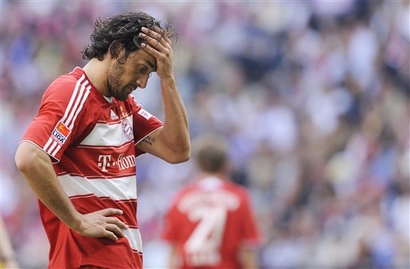 With only six games left in the season Bayern take on Schalke 04. Captain Dutch, Mark van Bommel, says that Bayern absolutely has to win this game today. That losing isn't an option. That may be easier said than done considering since the new coach arrived in Schalke, they have won three in a row.

Bayern kick off the match with some great passing. There was a nice back heel to Franck Ribery from Luca Toni. This is going to be a tough match so hopefully Bayern can pull it off. I'm not entirely sure they can if they continue to play the way have lately.

Krstajic receives the first yellow card of the match for pulling down Toni just before the fourth minute of the game. Manuel Neuer makes the save on the free kick. Greatpass by Pander, but it is stripped away by Lucio.

Ribery set up a nice shot for van Bommel which was a great shot, but it was blocked. Luca Toni was there as well, but didn't make a shot. It was taken away by Schalke. Some great passes going on for both teams.

Demichelis loses the fight with one of Schalke's players, but fortunately Andreas Ottl was in the right place and was able to clear the ball away, giving Schalke a corner kick. Halil Altintop makes a gorgeous goal that just slices through and finds the back of the net off a gorgeous header.

Ribery shoots a laser across the front of the goal line and no one is there to capitalize on it for Bayern. It shows once again what a step up he is from the other players.

Manuel Neuer is working for his money today. There was a lovely shot from Ribery, but he was denied as the keeper makes the stop once more. Ze Roberto had the ball and runs into a wall of Schalke players taking an elbow in the eye. He gets a free kick for Bayern. Sosa takes the shot and its just off the cross bar. Neuer is quite angry and pushes Kevin Kuranyi. Not entirely sure what that was about, but replays show that he may have ducked when Bayern took their shot.

van Bommel takes a shot to the face which puts Lell in a frenzy. Schalke is awarded a yellow for the gesture, but I missed the player. I'm not entirely sure Lell cared about his Captain or if he just looks for a reason to throw down, but he was ready to go either way.

Demichelis had the perfect opportunity to score, but can't capitalize on it. Unbelievable that he missed that. It was probably the easiest chance Bayern have had to score all game. One minute of stoppage time is added to the first half. Neiter team does much of anything during that time and Schalke remain in the lead 1-0 at the end of the half.

Bayern make a change at the half and Lukas Podolski will replace Andreas Ottl. A fabulous shot from van Bommel once more, but nothing doing again. Neuer is making some truly tremendous saves. He is definitely man of the match on Schalke's side.

Butt makes a great save and the rebound is cleared away by Demichelis. The ref is doing a great job today considering he's really got his hands full. Both teams are quite physical this time. van Bommel plays a ball over to Sosa and Podlski pushes off one of the players which makes the whistle go and Schalke get the ball back momentarily.

Rafinha and Ribery are both shown the yellow card at 62 minutes. Things got quite physical and both cards were well deserved. van Bommel goes down in a heap. He and Jones have been going at it the whole match. Hamit Altintop comes on for Sosa at 68 minutes.

Jones gets a yellow/red for a foul against van Bommel. He clipped van Bommel up high around his knee and didn't get any of he ball at all. Hopefully the Captain will be okay. I'm a little surprised by the lack of Schweinsteiger this match. He has been absolutely brilliant and absurdly consistent as of late. He definitely doesn't warrant sitting on the bench.

Borowski comes on for Christian Lell. The one man advantage is lost when Franck Ribery foolishly shoves a Schalke player giving him a second yellow in the match which sends him off the pitch. van Bommel received a yellow and is arguing about it as usual. Though this time, I think he had a reason to argue because as he was going down it appeared that the other player came across him. At this point, he should just let the ref give him a yellow at the beginning of the match and get it out of the way since they tend to be a little harder on him. Jones was also a 17.. maybe its all in the number?

Lucio picks up what appears could be a good injury, but there are no substitutions left so he'll have to stick it out. He came down on his ankle in an awkward manner with his leg hyper-extended so that could be something a little more serious. I hope not, but we'll have to see what happens. Shortly after that, he's run over by Neuer. Rough day for Lucio now. His injury appears to be a little more serious as he keeps asking to be taken off, but Bayern have already used their three substitutions so he's going to have to stick it out a little longer.

The Blues have won their fourth game in a row with a 1-0 victory over Bayern.