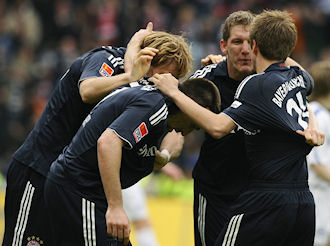 Bayern took on Arminia Bielefeld today with injuries to Rensing, Oddo, Podolski, Breno, Ze Roberto and Klose. Right away, Bastian Schweinsteiger nearly scores which also almost leads to an own goal, but it is kept out of Bielefeld's goal.

Lucio made a tackle in which he appeared to hurt himself. Bayern seem to have stepped up their game a little bit, but I can't actually tell if that's because they stepped up their game or Bielefeld is just struggling so much this season that Bayern seem that much more superior. Given their dreadful play for the majority of the season, I would likely chalk it up to Bielefeld's stuggle.

Ribery and Schweinsteiger had a great run, but there was a brilliant tackle by one of Bielefeld's member's and it was put away. Bielefeld take the ball to the net and Lucio has a great defensive play, but he is elbowed in the process so the ball is given to Bayern.

There was an incredibly great pass by Sosa, but once again Toni is unable to capitalize on a ball that should've been in the back of the net. Unproductive once more. What has happened to Toni this season? He can't seem to finish much of anything.

Some great footwork by Captain Dutch and when the ball is taken back to the goal line by Bielefeld, there is an absolutely beautiful save by Jorg Butt. Demichelis gets knocked in the temple, but in all fairness he wasn't exactly just standing around either. He was all over the other player. Luca Toni was taken down as well. At which point, the announcer talks about Toni being a great player, but he goes down if you frown at him. Sometimes the announcers are more entertaining than the game itself.

van Bommel draws a foul which gives Bayern a free kick. Ribery takes the free kick, but it is hit straight into the wall and Bielefeld takes the ball down the pitch. No goals by either side twenty two minutes in, but there has been plenty of action by both sides. At twenty four minutes, van Bommel draws a yellow card for a rather wicked foul. I'll give the ref this one. It was the right thing to do. For whatever reason, Lucio decided to bump van Bommel off the ball and Mark didn't look too pleased about it. He stood there for a moment with his hands on his hips before moving on. Someone needs to remind Lucio that they're on the same team. And being that the team member you decided to bump off the ball is your Captain, you might want to rethink things like that. Not sure what that was all about.

There's a lot of shoving and pushing going on in this match. By pretty much everyone on both sides. There is more talk that Klinsmann won't be back next season, but nothing we haven't heard already. The opinions on what he's done since he came are split, but I think, my personal opinion, is that when you take a team, who commanded such presence last season, and not many changes have been made to that team and yet they weren't top of the table once the entire season, something is not working right. And the only major change has been the coach so you have to wonder if it isn't that.

Some great missed opportunities by Bayern nearing the end of the first half. Now that Bielefeld have stepped up their game, its hard to tell that these two teams are on completely opposite ends of the table. I don't know if that's saying something for Bielefeld or discouraging for Bayern.

The second half kicked off with no changes from either team. This half is a little slower than the first half, but its still a physical match. Lell makes a cross that is far wasted because no one was there so Bielefeld take it back, but pass it too long and it's given to Butt to send back out.

Luca Toni is doing a lot of shoving and pushing. He should be careful since he's already gotten a yellow card. Sosa is replaced by Hamit Altintop at 57 minutes. Bielefeld concede a corner with 60 minutes gone and its taken by Altintop. It was whistled down before his kick and Bollman was issued a yellow. Altintop retakes the corner. It was knocked out by Bielefeld and Bayern try a third time, but the clearance is poor and van Bommel gets the ball back, handing it over to Altintop who slides it across to Lucio who misses and hits the side of the net.

Bayern finally score with a goal by Luca Toni. A gorgeous header to find the back of the net and see a much deserved celebration. A little dance and a team mauling, especially by Captain Dutch. Bayern take the lead 1 -0 with 65 minutes gone.

A foul against Ribery warrants Lamey a yellow card. Bayern were given a free quick through the work of Ribery on another player an it wasn't deserved, but I guess it happens more often than not. Demichelis is given a yellow at 68 minutes in which Lahm almost takes a ball to the face from the player that was fouled. Case of mistaken identity perhaps?

Good attack by Bielefeld, but nothing comes out of it and Butt covers the ball. Lucio is down on the sidelines with another injury. This time he's been stepped on on the calf just above his ankle. Bielefeld's keeper is one of the reason's that Bayern has only scored one goal. He's been great. On the flip side of that, so has Butt. Absolutely brilliant between the pipes this match. I haven't a clue why he hasn't been first choice all season.

Once more Bayern have a chance, but the keeper totally snuffs any chance they have. He quickly saves another and I'm telling you, this guy is putting on a show today. Bielefeld are lucky that the score is just 1-0 and it's because their keeper is quite cat like in his flexibility.

Bayern seriously need a replacement for Lell. He is just plain terrible and the majority of his fouls are so completely ridiculous. And let's face it, he doesn't even stand in the same league as Lahm. At 82 minutes, Tim Borowski comes on for Bastian Schweinsteiger who has had another solid performance.

Altintop had a beautiful chance to score, but he goes over the bar on what should've been a very easy goal for him. Two minutes extra time was added at the end of the second half. Lucio is down again. He has taken an absolute beating this match. Luca Toni has two opportunities, but he's unable to close the deal again. Without their keeper, Bielefeld surely would've been sunk a long time ago by a far worse score. Thomas Mueller was brought on for the final seconds in place of Luca Toni.

Bayern close with a 1-0 victory over Bielefeld. An interesting game to say the least.