Two return; One out; One rated doubtful

Share All sharing options for: Two return; One out; One rated doubtful 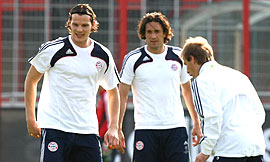 The evening before the return CL clash; Barcelona vs Bayern, Klinsmann gets a bit of good news. Philipp Lahm who has been out with a calf injury has been cleared and will return to the squad tomorrow. Alongside Lahm, Daniel van Buyten has returned to Munich. van Buyten has been on family leave due to a serious illness with his father. Good news on two fronts, Daniel's father is responding to treatment and is doing better which led to Daniel's return to the team. Both Lahm and van Buyten will be on Klinsmann's roster for the second leg against Barca. Welcome back Daniel! And thank goodness for his dad doing better. :)

The Belgian’s "sheer presence and positive attitude" would be a boost for the team, a delighted Klinsmann declared after welcoming back the experienced centre-half, a commanding figure who has been painfully missed in Barcelona and elsewhere. The same applies to Lucio and Lahm, both missing for last week’s sobering reverse at Camp Nou, but now set to appear on Tuesday. "It will give us much greater stability," Klinsmann observed.

Massimo Oddo is out with an ankle injury once more and will have to sit out this match against Barcelona. He has been bothered by the injury for some time, but has withdrawn from the match tomorrow. Also likely to miss the match is Lukas Podolski. He is rated as doubtful for the match due to a calf problem.