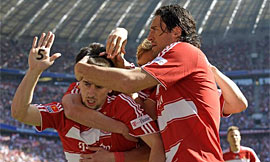 Bayern 4 – 0 Frankfurt
Normally when I write for the offside, I write my post in my window as I’m watching the game. Today, my internet is acting up because we’ve had a series of storms that brought high winds and rain so my internet is patchy. Therefore, I’m writing in word and hoping to be able to post at some point today.
Bayern are taking on Frankfurt amid rumors of the possible firing of Jurgen Klinsmann. Rumors swirl that if they win or draw today, Jurgen will keep his job through the season before he is let go. If they lose, rumor is he’ll be fired straight away.

Lucio is back in defense after missing the game midweek against Barcelona. I haven’t watched the game, but do have it recorded. Though, by what I’ve read, it was absolutely dreadful and I probably shouldn’t watch it.

Butt is getting a second chance in goal. This pleases me. I don’t think h stood a chance in Barca for the way it sounded like the defense played. I’m looking forward to seeing him play a little bit more. Hopefully he will be given the opportunity more often.

The game kicks off with a wonderful goal by Franck Ribery in which he pays tribute to his best friend, Daniel van Buyten, who is still home with his ill father. Showing a supportive ‘5’ on the palm of his hand and pointing to it when he scored.

A great stop by Butt. The team is looking better overall today. Though, it’s still early in the match so we’ll see how they hold up. I still miss Miroslav Klose very much. Toni isn’t much without some support from Bayern’s very own Mother Teresa.

At 16:30 there is a great ball over the wall from Franck Ribery in which Luca Toni hits a gorgeous volley into the back of the net. And this one actually looked like he meant to do it. Most of the time Toni’s height leads his goals to look like they’re purely accidental, but this one looked very much like it was intended. Good job on the 35th goal for Bayern.

Lucio had a few words with Sosa when he didn’t get a ball and shortly after that Sosa gives the ball away to Frankfurt again. I really wonder about his play. I still haven’t seen anything out of this kid that makes me think he’s worth having. I see people all over the place talking about how wonderful he is, but I just don’t get it.

Toni had another opportunity, but it is cleared away given Bayern a corner. The corner is unsuccessful and play goes on. Ochs fouled Ze Roberto which was quickly followed by a foul against Sosa giving Bayern a free kick. Some great give and go between Captain Dutch, Mark van Bommel, and Franck Ribery.

Ochs seems to be a bit of a rough player. Chris has an opportunity for Frankfurt, but sends it high and over the bar. They get their first corner and it is unsuccessful. Butt makes he save and play goes to Bayern. Sosa has a good run, loses his balance and Ribery recovers the ball.

Ribery gets a minor injury to his ankle which requires some sideline work, but he rejoins the team just a few minutes later. Bastian Schweinsteiger takes a corner at 36 minutes and its headed in by Lucio bringing Bayern’s lead to 3-0.

Christian Lell is given a yellow card for trying to walk in the air on one of Frankfurt’s players heads. Undoubtedly deserving that one. Not at all surprised that was a Lell move either. Ochs now receives a yellow card for a foul against Ze Roberto with five minutes to go in the first half.

Previously, I have always called Captain Dutch; The Flying Dutchman and it is very clear why. The man can’t keep his feet on the ground. Even when kicking the ball across for a pass, he gets a little air beneath him before making contact. Both feet come off the ground. Maybe he should be Flying Captain Dutch? ;)

Van Bommel steals the ball and gives it to Ribery who gets tied up with some Frankfurt players in time to end the first half. The team walks off with a 3-0 lead and you can see Captain Dutch already conferring with Lucio on things. Whether you like van Bommel or not, one thing can not be denied, he gives his all to his team and he’s always being a leader. I happen to love this about him.
Second half starts with one change for Bayern and that is Massimo Oddo in for Christian Lell. Klose is in the stands with his wife and twins, looking very intense while he watches his boys play on without him. I’m sure he’s another one that would much rather be playing.

Schweinsteiger brings the score to 4-0 with some triangular football. Captain Dutch is all dimples and very proud of his boys at this point I think. Schweinsteiger just happened to be in the right place at the right time as the ball got through the feet of the keeper and he fell leaving Schweini completely unmarked and the goal wide open.

Franck Ribery is replaced by Lukas Podolski. I’m not sure what that’s about because there is still thirty minutes left to play and surely Franck might’ve been able to score again. I’m curious if he drew the five on his hand himself or if he had some help.

Sosa fouls one of the Frankfurt players and he is being attended to on the pitch. Meanwhile Franck and Lucio hit the showers. Bayern are still looking pretty solid. Shortly after, they show the Frankfurt player being helped off and down to the locker room.

Luca Toni gets another goal, but he is offside so it doesn’t count. He was just slightly offside, but offside none the less. Collision in the box which takes down Schweini and it should’ve resulted in a penalty, but the ref didn’t bother to call it. Frankfurt seems to have basically given up at this point. They don’t seem to be trying to much at all anymore. Bayern are still pushing forward, possibly looking to take an even further lead. 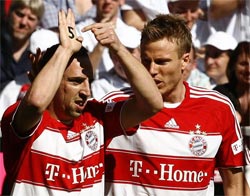 Andreas Ottl takes a shot himself, but it sails high and over the bar. Not anywhere close and nothing for the keeper to do, but watch it go over. Van Bommel takes a foul and shortly after that the game is over. Bayern walks away with a 4-0 win over Frankfurt. It amazes me how this team can play such crap and then come back like this.