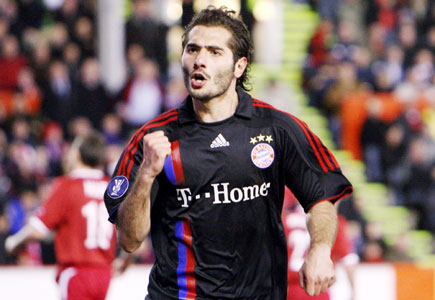 When you think about Hamit Altintop you think about a player who has a lot of heart and determination. He is a strong fixture in Bayern's hierarchy and when on the pitch, his presence doesn't go un-noticed. 366 days after his last Bayern goal (March 6, 2008), Hamit scored once more, his first this season, on March 7, 2009 against Hannover 96 to bring Bayern's score up to 3-1. Much celebration was to be had by team and fans alike. Hamit Altintop was on his way back.

Unfortunately, that moment was much too shortly lived. Sixty-five minutes into the match, Hamit hopped off the pitch. Forty-five minutes after the game was over, he left the Allianz arena on crutches. The diagnosis: a torn calf muscle. He is out for two to three weeks, but Jurgen Klinsmann hopes he will be fit as soon as possible. He was having a good game and I, for one, would love to see him back on the pitch. When he's on, he's brilliant. He's just been plagued by injuries.

Daniel van Buyten also received a minor injury before the match started, but it progressively got worse during the game. In the seventy-sixth minute he asked to be replaced and an MRI showed some minor bruising on his foot. He is expected to be fit for Tuesday's match.