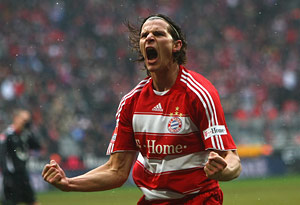 For this match, Bayern host Hannover and Captain Dutch is suspended. Lucio takes the armband, Demichelis slides up into the holding role which is usually filled by van Bommel and the BEAUTIFUL Belgian Bull, Daniel van Buyten, gets a start too. I suppose there can't ever be a game in which all my guys get to play. That just cant be done for me it seems, but at least Big Dan is getting some much deserved playing time. Podolski makes another start and I hope to see Toni back soon because all Podolski deserves to be doing is sitting on the bench and waiting for his time to lave for Cologne. Philipp Lahm also has recovered from his flu and makes the start today as well.

It's snowing currently so the pitch is a bit sloppy. A great cross from Hamit Altintop that Klose just missed. Surely it would've gone in if he had made contact, but he was just shy. Sixteen minutes in Lucio slips up and allows for Steiner to score taking Hannover into the lead 1-0.

Podolski gets his first chance and takes his time, barely putting anything behind the ball so it went wide of the net. The announcers keep saying you have to feel sorry for Lucio, but that's all bull. It's time for him to eat some serious bench until he starts playing like he should get to start every match. I am so aggravated with him lately. More than usual.

Twenty minutes in, Daniel van Buyten (have I mentioned how much I absolutely adore this man!?) saves Bayern's butt once again and scores a gorgeous header. The cross comes beautifully from Schweinsteiger and van Buyten heads it home with ease. How he is continually put on the bench and Lucio gets to start every game is really beyond me. Just five minutes later, Miroslav Klose follows up with a gorgeous header of his own, scoring goal number ten this season and taking Bayern into the lead 2-1.

Around 32 minutes, Podolski scores, but it doesn't count as the whislte had been called for offsides. A few minutes later, Altintop redeems and scores his first goal of the season for Bayern bringing the score to 3-1. Klose got clipped by Enke and it seems like it should've been called because the challenge was nowhere near the ball, but it didn't get called.

Lahm flicked a beautiful ball into the middle, but Hamit was just late and didn't get it in. This line seems to be working a little bit better than the previous one. Rensing is having a decent game again as well. van Buyten nearly scored a second time, but it was just stopped. He is having a fantastic game and playing his butt off. Surely Klinsmann has to notice the dedication of Dan to a team that has given him no reason to not walk away and yet here he is, playing all out and not holding anything back. Showing that he deserves a spot on this team. Perhaps Podolski could take some pointers.. Bayern lead 3-1 at the half.

Hannover made one change at the half while Bayern made none. Lucio got called for a hand ball, awarding Hannover with a free kick. Rensing is really holding his own this match. Maybe I should've talked sooner about him needing to step up and give people a reason to stop talking about how terrible he is. Ze Roberto tried his hardest to score for Bayern and it was very close, but it went just wide.

Podolski tried once more to find the goal, but was unsuccessful. He went wide and hit a post that is beside the goal. He probably could've gotten it into the net if he had used his right foot, but he went left and it went wide.

Did anyone else notice that Massimo Oddo has died his hair black? Looks good. Yes, I'm still a girl. I can't change that. ;) Hamit Altintop has been injured. It looks like he might've gotten his studs stuck in the pitch and possibly twisted a knee or something. He hopped off the pitch and will be substituted by Andreas Ottl. Schlaudraff takes a free kick that is headed away by van Buyten. What a great game he is having. Yes, I know I said it, but I'm going to keep saying it. The boy deserves much more playing time than he's getting - and I'm not talking about being brought in at the 83rd minute of matches either.

72 minutes in and Lukas Podolski finally does something productive for Bayern and heads in a lovely goal bringing the score up to 4-1. The cross was delivered spot on by Ze Roberto and Podolski just headed the ball beautifully into the net.

For whatever reason, at 76 minutes Klinsmann has decided to bring Breno on and bring van Buyten out. This doesn't make me a happy girl at all. Sometimes I think this team and some of its players get rewarded for playing badly and when you work your butt off and play brilliantly you get rewarded by receiving bench time. Further proof that Klinsmann is all about politics is the substitution of Podolski for Landon Donovan. Not that Podolski has been a great asset to Bayern as of late because he hasn't, but he's certainly put forth enough effort this match that he should've been allowed to stay on the full 90 minutes. van Buyten should've been granted that luxury as well.

Bayern are awarded a corner kick and Oddo sets it up beautifully but it is clearned by Hannover. Though Bayern keep it in and Ottl clips it over and Donovan tries to put it home, but it is saved by Enke. Bayern are keeping most of the possession now and recovering the ball fairly quickly when it's turned over. Miroslav Klose had a good opportunity to bring the score up to 5-1, but just missed. However, Demichelis came right back and put the the ball in the net by heading in a cross from Ze Roberto with one minute left in the match.

I still think they didn't play their best football. Hannover clearly played some very lack-luster football which allowed Bayern to take control of the match. Hannover's defense has been completely transparent allowing Bayern to easily break through their lines and rail them with a 5-1 beating.