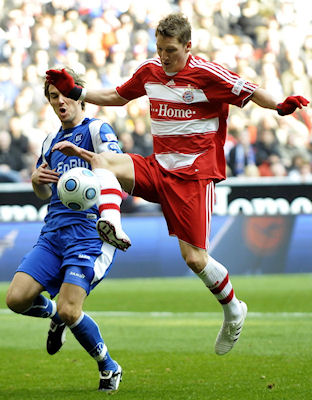 Before the game gets started, a couple thoughts. van Bommel has agreed to the one year extension with Bayern and this makes me very happy. Captain Dutch will be back for one more season at least and I am looking forward to this. Bayern have drawn Barca in the CL which should prove to be a great match. FCB vs FCB. Should be fun to watch. Martin Demichelis has also been given another contract. The only one left hanging out is Ze Roberto. Of course, everyone knows by now that Klose is out for awhile after having surgery. We wish him a full, speedy recovery. And Luca Toni has been rehabbing in Italy, but is on the reserve list today. I don't think he'll be playing though as he's sitting off with Massimo Oddo in regular clothes.

The game is starting now and I'm a little confused by the start of Sosa. This could be a good line for Lukas Podolski since there is no competition for him in the striker position, but it could also be a bad thing for him. He works really well with Klose.

Something that needs mentioned is that Schweinsteiger has been playing some really beautiful football the last games. He is getting overlooked lately, which is unusual with all the expectations placed on him and Podolski, but he is playing some really great football. There was a great ball across by Ze in which van Bommel made a fake and went over the top of the ball allowing Schweini to take the shot, but it is stopped.

Karlsruhe responds with an attempt of their own and the ball hits Lucio instead and goes just wide, but it was a good effort by the Karlsruhe players. Haven't seen much of Sosa at all the first ten minutes of this match. Still wondering why he was started. He missed a great opportunity which Captain Dutch followed up on, but unfortunately was kicked when he was trying to deliver the ball so it wasn't a good shot.

Schweinsteiger tried once more to score and it was nearly there, but went just off the post. No one else was there to follow up and get it to the net so it was cleared away. At almost 13 minutes Lucio had a gorgeous header, but he went straight in and the keeper got a good read on it, stopping it before any damage was done. Ze Roberto responded with a shot of his own, but it sails high and wide.

This game has been all Bayern so far in the first half. They're very aggressive and bringing the ball to the goal, but not capitalizing just yet. Lell just had another attempt, but it didn't get anywhere. Karlsruhe gets the ball, bu it is taken back by Bayern. Though Karlsruhe responds quickly and takes it back themselves before a bad pass puts the ball out of bounds and it's given to Bayern.

Karlsruhe had a gorgeous chance with their player pretty much on his own, but he couldn't do anything with it and fo the first time in 19 minutes, Michael Rensing finally has something to do and easily makes the save. Michael Mutzel is given a yellow card for a tackle on Ze Roberto. Schweini takes the kick, but it is stopped by the wall.

Demichelis is outplayed by one of Karlsruhe's players with some fancy footwork, but Bayern retrieve the ball and Sosa tries once more, but again his shot isn't anywhere on target. Finally, a good ball through from Ribery and Sosa finally does something worth mentioning when he plays the ball into the back of the net to take the lead for Bayern. I still don't like him though. He's far too unproductive 99% of the time.

Lell had the ball and van Bommel was wide open by himself, asking for the ball and instead Lell tries to be tricky with the ball which results in a screw up and Karlsruhe get the ball instead, taking it down to Rensing and it just goes over the top of the net.

No extra time has been added and at the half, Bayern lead 1-0. They've had the most control of the game so far. The score should be far more than 1-0, but the keeper for Karlsruhe has been doing a good job catching most of Bayern's shots when they weren't off target.

Second half kicked off with no changes for either side. I'm a little surprised by the reaction of Franck Ribery just now and the slap in the face to the other player. Not sure that deserved just a yellow. I've seen straight reds for lesser crimes and you have to wonder what the ref was thinking on that one.

Lahm had a good opportunity, but it might've been better off to be played back to Podolski, but either way, it didn't find the net. Podolski hasn't really shown up today so I'm not sure if it would've been a good play from Lahm to pass it back to him anyways. Either way, Lahm wasn't able to score.

There was an opportunity for Karlsruhe to score and Podolski didn't even make an attempt to stop it. I'm not sure that he's completely in the game tody which is a shame because this game could've been an opportunity for him to shine.

Lucio gets in a collision and appears slightly hurt, but not much. Da Silva also picks up an injury from a collision with Podolski and has to be taken to the sidelines. Michael Rensing had a good save, even though it looked like an accident. It happened prior to both the collisions in which he kicked the ball away with his foot though he didn't actually look like he knew where the ball really was.

The ref just blew the whistle for a hit on Schweini, but he was a little aggravated because he managed to stay on his feet and carry the ball on so he wanted to play on. He takes the free kick and it cleared away but brought right back in by Demichelis, but Miller punches it away and Lucio brings it back once more only to be denied again. Demichelis had another nice header, but its tapped away just in time by Miller or it would've gone in.

Bayern are applying a lot of pressure to Karlsruhe, but can't seem to put anything into the back of the net. Great job by Karlsruhe's keeper today. van Bommel receives a yellow card and I didn't see what happened as I was looking away, but the announcers seem to think it was given on reputation and not on what van Bommel did. I'm not sure what happened though because I wasn't looking at the TV at that moment.

Karlsruhe have caught Bayern sitting back on their heels and they're getting plenty of opportunity to make Bayern pay for that, but Bayern finally get control and take it down. A bad pass by Ribery puts Karlsruhe back on the ball until Bayern take it back.

Andreas Ottl is the first substitution for Bayern and he comes on for Sosa. As good as he was in the first half in spots, he has been completely invisible in the second half. Demichelis just picked up a yellow card.

van Buyten is the second substitution for Podolski. The announcers are amusing talking about a scarecrow playing better up front than Podolski has this match. I think they're not impressed with his play at all today and I can't say I blame them because he was virtually invisible.

With 90 minutes and extra time, Karlsruhe has an opportunity and both keepers are awarded with yellow cards for pushing each other. Rensing misses the save and Ze Roberto clears it away fortunately. The final whistle blows and Bayern walk away with a win, but Karlsruhe should be proud of the way they took it to the team in the second half, especially in the last minutes.

Best announcing moments as far as I'm concerned:
* Schweini has bulldog determination... (My favorite of the day).
* Demichelis is slow as molasses.
* The big man goes down, doesn't touch the ball, doesn't touch the player and gets a foul against him... unbelievable.