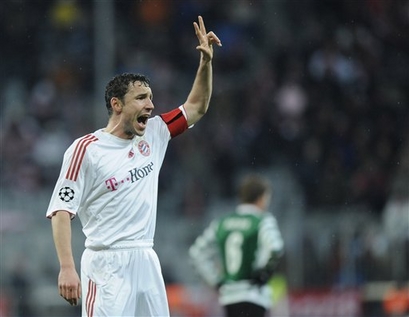 This was an interesting match for me because the only stream I was able to get open had absolutely no sound. Bayern routed Lisbon in a 7-1 defeat today. Goals were scored by Lukas Podolski (x2), an own goal by Polga, Bastian Schweinsteiger, Mark van Bommel, Miroslav Klose and Thomas Müller.

van Buyten made the start alongside Lucio, Lell got the start in place of Oddo. Hans Jorg Butt also made the start in goal. He looked good. At the half Lucio was taken off for Breno. I haven't seen a lot of Breno, but to me he plays a little far up in the midfield rather than holding the back line. It seemed like he and Andreas Ottl swapped places quite a few times. I would like to see a bit more of Müller.

The game itself wasn't all that impressive to me. There were a couple sloppy mistakes on both teams parts. While the score doesn't reflect that, you'd think Bayern had a great game, but I'm still not entirely happy with the way they're playing. And I know I'm absurdly biased, but the goal by van Bommel was impressive and I was completely certain there was no way it was going in. Color me surprised and pleased.

Podolski... I'm still really confused about. He plays well when he wants to. Like the beginning of this match. Then he disappears for awhile and you forget all about him and what a good player he can be when he wants to be. Then he shows up again later. He took a boot to the thigh near the end of the match and went off the pitch for a few minutes. He came back on but continued to limp and was still limping post game so here's hoping he didn't pick up a major injury. Bayern can't really afford any more striker injuries.

Schweini had another decent game. A couple players seem to have come on form. It would just be nice if the rest of the team would catch up and they'd start playing the great football they are capable of. It's funny how a team full of top stars plays like they've never seen a football the majority of the time. No team cohesion these days. The CL is where Bayern excel. Here's hoping they can carry it on into the Bundesliga matches as well.