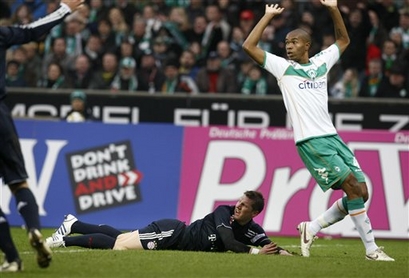 Today, Bayern are being hosted by Werder Bremen. Last match, Bremen took Bayern to school in a 5-1 victory at the Allianz Arena. Today, Bayern hope to do a little teaching of their own. The only question is, with the form they've had, will they be able to do it?

Werder almost go ahead at 4 minutes, but thanks to Ze Roberto, he clears the ball away and Bayern are given a corner taken by the Captain, Torsten Frings.

Bayern give a good shot from Franck Ribery and are given a corner. Nothing comes of it and Demichelis goes for a header but it's whistled down. He takes off with the ball and gets a little scolding in which he responds like a little schoolgirl. I was waiting to see him kick the pitch and wriggle back and forth a little bit to match that smirk and the hands behind the back.

Diego makes a good effort for Bremen and takes it close to scoring, but when he sends in his cross, it's hit away by Massimo Oddo. Bayern need to keep this man. Shortly after that Schweinsteiger takes a shot, but it sails wide.

Games between Werder and Bayern always seem to have a more aggressive tone to them. I always wait for someone to get seriously injured the way they play. I guess I'm not the only one who sees that now, Naldo was just awarded a straight red card, putting Werder down a man. Ribery takes the free kick and it goes straight to the keeper. Almeida has been substituted with Boenisch.

A great setup from Roberto to Ribery and back to Roberto in which he picks up Borowski, but Boro's shot is stopped by the keeper once more. Bayern come right back with another attempt, but it is taken away by Bremen. Bremen take it down the pitch, but Bayern take the ball back and start another attempt back to the goal. Ribery takes a shot, but it's once again stopped. It seems as though this game is going to come down to whichever goal keeper messes up first.

Bremen would've had a chance right at the end of the first half, but they mess up a bit and Bayern clear it away just before the whistle is blown for the halftime break.

Podolski coms on in the second half for Bastian Schweinsteiger. I hope that he didn't pick up some kind of injury from that hit by Naldo. Bremen didn't make any changes for the second half. Podolski takes a shot just two minutes into the half, but it sails high over the posts.

Oddo has really put some nice crosses together but no one is ever there to pick it up. Ribery puts a nice shot up for Podolski and he screws up and kicks it pretty much back the way it came instead of to the goal. For someone who wants more playing time, he sure doesn't play like that.

You can sort of tell that Mark is Miro's best friend these days. Miro seems to be taking a couple pages out of the old van Bommel play book and has been quite the aggressor in some instances. Mark must be so proud of him. ;)

The keepers for this game have been absolutely brilliant. I wish Rensing would play like this every match. van Bommel has had a very good game as well, but that usually goes unnoticed by everyone except me. That's okay though, I have a lot of love for the Captain.

There have been some wasted opportunities by both teams and neither have been able to find the back of the net with 70 minutes gone. Mark van Bommel just received a yellow card which means he'll have to sit out the next match against Hannover 96 at home. That was his fifth yellow card. I don't agree with the card since some of the stuff that has been pulled has been much worse and hasn't been carded.

Pizarro had a good chance to score with Rensing nowhereto be found, but he blew it. Ze Roberto had a brilliant chance, but Vander is there once more. Battle of the goal keepers. It's been a good give and go by both sides. Lot's of back and forth action currently. 75 minutes in and Landon Donovan comes on for Hamit Altintop. Oddo made a nice shot on goal, but once again Vander is there to stop it. 77 allows Andreas Ottl to come on for Tim Borowski.

Podolski isn't doing himself any favors this game. He really isn't playing well and there is no reason for Bayern to do anything but keep him on the bench until he leaves for Cologne. He very clearly doesn't have the desire to play regularly for this team.

The game ended with no extra time added on and the teams walking away with a draw. I'll be the first to admit that I don't normally watch Bremen play so I don't know how they usually play. To me, whenever they play against Bayern it always seems very aggressive, but not in a positive way. I'm always under the impression that they are out to hurt players. I don't like that. Bayern almost need to throw Lell in and let him throw some punches as well, but that wouldn't make me happy either.

Great game by both Rensing and Vander. They earned their money today. Someone that watches Bremen regularly, can you tell me why Vander doesn't play all the time and Wiese does because I have never been impressed with Wiese.