Share All sharing options for: van Bommel given armband 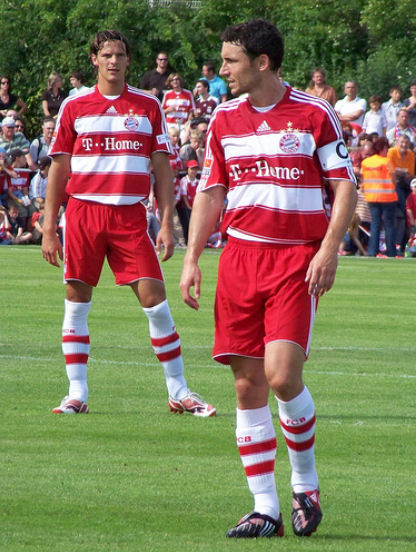 How happy am I today? Extremely. The love of my football life has been officially given the Captains armband. Not just for the pre-season, but the entire season. Klinsmann has named Mark to be Oliver Kahn's predecessor in the Captain's role. He will have deputies in Martin Demichelis and Lucio. I've been hoping for this since the announcement of Kahn's retirement and I couldn't be more pleased. It seems that Klinsmann has been reading the Bayern Offside and my many arguments for Mark as Captain. ;)

"He is predestined for this position," coach Juergen Klinsmann said Friday. "Mark is suited to this role. Since the beginning of pre-season the team have been well led. He is enthusiastic and is not afraid to criticise when he feels it necessary. He can also communicate with the team in many languages."

In case you're not aware, he speaks his native Dutch along with German, Spanish and English. van Bommel is the first foreign player to skipper the Bavarian giants. He has made 56 appearances for the team since joining them in 2006. He is the team's 14th Captain. Mark's first official full time role as Captain will come when he leads his team out for Sunday's first-round German Cup match at Rot-Weiss Erfurt. This has made my day and now I can set off to work in a good mood. :)