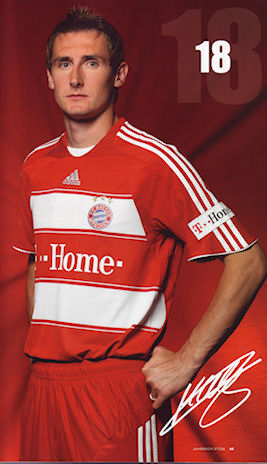 Here we are back in the Player Profile section and I figured since I kicked off with Mark, what better way to follow up than with his BFF, Miroslav Klose. I remember the first time that I seen Miro play I thought that he was quick and pretty agile. Then, he scored and I'll be the first to admit I was completely mesmerized by the salto. It's trademark Miro and I always hope for it when he scores. We don't always get it, but when we do you can bet I'm pretty happy about it.

Miro is the epitome of the shy, quiet boy that you had your first crush on in grade school. He is the one that you know without a doubt is going to create chances for his team and he will always find a slot to take the ball through. He has some fancy footwork that often leaves others in the wake of his decision on the pitch. The only thing I wish Miro would change is his unselfishness. Sometimes I know he could very easily put the ball into the back of the net, but he often sacrafices his own opportunity to pass the ball to his teammates to give them a chance. While this isn't necessarily a bad quality, it has left him passing off the ball when he could've easily taken the shot and quite possibly scored on his own. He has a big heart, but he needs to learn to be a little more selfish.

When he transferred over to Bayern, I bet Bastian Schweinsteiger was immediately excited until he had a moment to think. Then my guess is his thought was 'Oh no, now I have competition. Fashion competition.' Prior to Miro joining Bayern, Bastian was the only fashionista on the block. I bet he had to go through his scarves collection and prune out the ones that were 'last year' and make way for all new dressings so that Miro didn't make him look bad. And if Miro were to have been a fly on the wall, he would've laughed in that curious, boyish tee hee sort of way.

Club
Miro played a year with FC Homburg before joining the amateur division of FC Kaiserslautern in 1999. After only sixty-seven games, he had already racked up an impressive thirthy-three goals compared to a disappointing second season in which he only scored seven times. Although it wasn't a shining moment in that second season, it was enough to generate interest from Werder Bremen and Klose transferred to Bremen in 2004.

Werder Bremen
You could argue that he didn't get off to a brilliant start at Bremen, but he managed to forge a deadly partnership with both French midfielder Johan Micoud and Croatian forward Ivan Klasnić. The trio made for an impressive, aggressive attacking triangle. In 2004, he scored fifteen Bundesliga goals.

One of the things that often gets overlooked when it comes to Klose is that he is one of the best headers in the Bundesliga. If you put him inside the box, he has a natural killer instinct that teams with excellent technical ability, and is equally lethal with the ball at his feet. In the 2005-2006 season, Klose scored twenty-five goals, the highest of the season, and sixteen assists in a mere twenty-six games.

Bayern Munich
In 2006, it was evident that there was some unrest with Klose at Bremen and rumors about his departure came to fruition. Clubs like Juventis and Barcelona were linked with him, but on June 7, 2007 he confirmed that he'd leave Werder Bremen either before the 07-08 season or immediately following the end of his contract with the club that year.

On June 28, 2007 Miro completed his medical and signed a four year contract with his current club, Bayern Munich. His debut came on August 11, 2007 against Hansa Rostock. He made his mark right away by scoring two goals. He also collected his first hat-trick for the club in a match against Energie Cottbus. Throughout the year, Klose competed with newly signed teammate Luca Toni in a goal scoring spree.

National Team
Much like the start of his club career, Klose kicked off his international career by waving a 'hey I'm here' flag. On March 24, 2001 he took to the pitch as a substitute for Germany in a match against Albania and two minutes from time, he headed in the winning goal. Germany won 2-1. Another international highlight came on September 8, 2007, as he captained Germany for the first time and celebrated this honor by scoring both of Germany's goals in a 2–0 victory over Wales. The next day, one of the headlines on the UEFA website was “Captain Klose Takes Germany Closer (to qualifying).” An interesting bit of information about his role with the national team; the German national team has never lost a game in which Klose has scored. In the 2006 World Cup, he won the Golden Boot.

Did You Know?
He is the first player representing unified Germany to finish as the World Cup's top scorer, and the only player to have scored five or more goals in consecutive World Cups. One of Miro's favorite past times is something that use to drive his wife crazy, he would often try to turn the lights off by knocking around a ball with his head, chest and feet.

Other:
Klose is married to wife Sylwia is the father of twins Luan and Noah. He has stated that at homehsi family speaks Polish to one another (something he also does on the pitch with club and national teammate, Lukas Podolski) while his sons learn German in Kindergarten.

And we'll end it with a video compilation of a pick of 10 goals: