Mark may see Oranje yet...

Share All sharing options for: Mark may see Oranje yet... 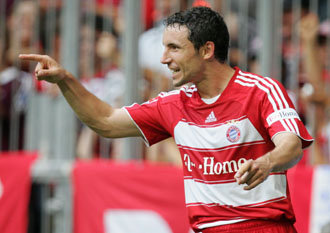 Thanks to Diana, I was directed to an article in which it appears that my favorite Captain is going to be doing some double duty; and I don't mean by being the object of my affection. ;) Today, Bert van Marwijk has announced his preliminary squad for the Netherlands friendly to be held August 20 against Russia. Amongst those making the cut for the preliminary squad, I was very pleased to see the name of van Bommel. It's been a long time coming and is very overdue in my opinion. I am very glad that he has been recalled now that van Basten has moved on from the National side. He definitely deserves this. And yes, I'm baised, but come on, are you seriously going to tell me that he shouldn't be playing for Oranje? Hear me scoff now. ;)

van Marwijk will announce his final squad on August 15... the same day that Mark and his side will kick off the Bundesliga season opener against Hamburg SV. Today, I'm sure children wept for joy, adults rejoiced in the news and windmills all around the country stopped for a moment of recognition in his honor. Hey, this is my world right? Anything can happen. ;)

In other news, Demichelis faces a two week layoff after yesterday's match injury. Aside from Demichelis, Ribéry (ankle ligaments), Sagnol (Achilles tendon), Butt (sprain), Borowski (knee), Sosa and Breno (Olympic duty) are all non-starters. Which brings us to Luca Toni (calf) and Bastian Schweinsteiger (flu) who are doubtful for the match.