Share All sharing options for: Bayern loses to Inter 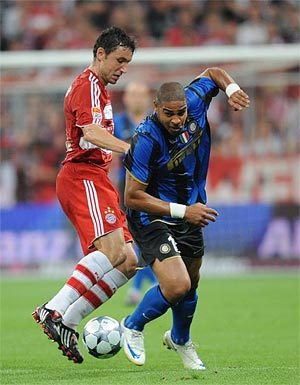 Well that was a somewhat dismal game. I was expecting a lot more from this match-up and my expectations were sorely disappointed by the lack of exciting play by both teams. The keeper for Inter really was great though. Rensing had some great moments. Lucio had some rather... Lucio moments. Neither team seemed that motivated to win, which I suppose is what happens when it's just a pre-season friendly, but I had hoped to see a little bit more sparkle from both teams in this matchup. van Bommel came out with flare and ended up hurting one of Inter's players. He apologized a lot and got pet in return, but really, who are we kidding, this is how Mark plays and one of the many reasons I love him.

Currently, there is no selection for Captain and I try to be objective as I watch the game and see who will make a good Captain and I really don't see anyone showing the type of leadership and direction that Mark does. He's been the captain for all of the pre-season matches. The only other people that have worn the armband are Demichelis and Lucio, but only when Mark was off the pitch. I wonder if that means he will be the next Captain. I don't know if Klinsmann cares or not, but it has to mean something to someone that Oliver Kahn said he'd make a great Captain. Doesn't it? 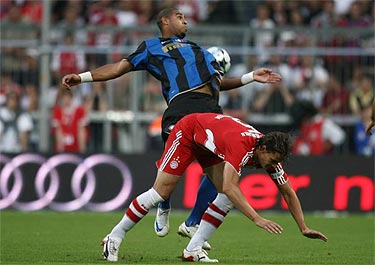 Did you notice that Willy Sagnol wasn't in the lineup? He's injured again. I'm starting to wonder why we keep him when we won't play him anyhow and when he's afforded an opportunity he's injured anyways. It's sad because he use to be a class player and I hate to see his career end this way, but it's time to hang it up. And here I go disappointing you all, but I'm sometimes convinced that Lukas Podolski plays poorly in certain matches on purpose. I thought that against Cologne and he only proved my point by scoring twice in the last match, but getting credit for three. Then he came back today and was pretty non-existant in what I seen. Did Schweinsteiger even play this match?

The funniest thing about that question is that for about the first forty minutes, the commentators on the stream I was watching kept on calling Christian Lell, Schweinsteiger. It wasn't until about forty minutes into the match that he had discovered he was calling Lell wrong and corrected himself. What's worse is he read the starting line at the beginning of the match. Perhaps he read Lellsteiger instead? ;) 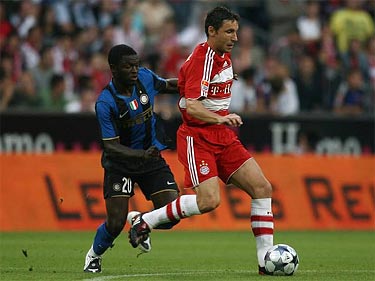 Luca Toni, Tim Borowski and Franck Ribéry were all in the stands. Probably severly disappointed that they couldn't be on the pitch to help out their team. Ribéry, at one point, looked like he was trying to find a quick exit from the arena. I am looking forward to his comeback. Toni will be out for a couple more games. The bright spot was Kroos. The first formation gave Lell and Lahm a lot of opportunity but that came to an end when Demichelis had to come off early. Lucio's loss of the ball was the point above for the Lucio being... Lucio. I can not stand when he plays like this.

The pace wasn't as bad as it could've been and in the latter half of the second half, Bayern picked up their possession dominance, but it was a little late and you have to give credit where credit is due, Inter's keeper made some great saves when we were on target.

Overall, I wasn't completely pleased with the match, but I wasn't as disappointed as I've been in previous pre-season friendlies. And well, when I got a little upset by the performance Captain Mark was there to save my day. :D