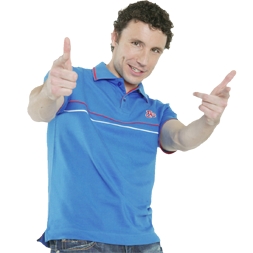 Since Dish Network has disappointed my Bundesliga Loving American self by canceling their contract with Gol TV, I am going to start my player profiles to console my broken heart. You're all fabulous readers and really up to date on the team, but maybe I will tell you something you didn't quite know yet. This is the first entry in my new Player Profile section and you'll be none too surprised that I started off with my favorite, the lovely Mark van Bommel.

He commands presence when he's on the pitch. He's a leader, he pulls his team together. He's the first one to argue when a foul has been committed against his mates and let's face it, he is good at taking a foul and initiating them too. When there is a game of importance that he can not attend, like during his suspension last year for the Champions League, he sends the entire team individual inspirational text messages even though he can't be with them. He is the care-giver of the team and no matter what happens, everyone knows they can count on him. He's got great air game (which has lead me to dub him the flying dutchman™) and couldn't play without his tongue of wonder™. Have you noticed how often he sticks his tongue out? He may not be the Captain of the team yet, but he definitely fulfills that role. Whether he wears the 'C' or not this year, you can be assured that Mark will continue his on pitch dominance and off pitch guidance. He's got a style that is unique to him. When new team mates come on board, such as Miroslav Klose, he is the first to take them in and make them feel welcome. Forging a great professional relationship as well as a true friendship. Miroslav Klose has said that Mark was the first person to make him feel welcome at Bayern. He goes the extra distance even when he doesn't have to. Aggression accompanied by compassion. Not many people can pull that off.

While his on pitch antics haven't always been favorable, there is no doubt that his passion for the game is something that sometimes carries his emotions to a boiling point. He's gotten better over the years, but there are still moments when his better judgement takes a vacation and he reacts before he thinks.

Position: Midfield
Midfield general Mark van Bommel is a tremendous talent who complements his consistent displays with trademark goals from distance. There is even training footage of him set up at a distance of 30-40 from goal just launching shots into the net. I wonder if Klinsmann will continue this training regimen for him.

Club
van Bommel developed into arguably the Eredivisie's foremost midfield player during a seven-year spell at SC Fortuna Sittard, his first professional club, after breaking through at RKVV Maasbracht in his hometown. He moved on to PSV Eindhoven in 1999 and was a league champion in three of his first four seasons. van Bommel enjoyed a superb 2004/05 season, helping PSV to the UEFA Champions League semi-finals and claiming a hat-trick in a victory against AFC Ajax that proved crucial to regaining the Eredivisie crown from the Amsterdam club. Fourteen league goals was a personal best, earning him both the Dutch Player of the Year award and a three-year contract from FC Barcelona having bade farewell to PSV by lifting the Dutch Cup after a 4-0 win against Willem II. More glory followed in Spain as Van Bommel helped Barça to an 18th league title and finally got his hands on the UEFA Champions League trophy. But he was falling out of favour and joined FC Bayern München in August 2006 for a reported €3m on a three-year deal.

van Bommel was signed by PSV in 1999 where he formed a midfield partnership with Swiss international Johann Vogel. He won three Eredivisie titles and two Johan Cruijff Shields with the club. He was also named Dutch Player of the Year in 2001 and 2005.

In his final season with PSV, having assisted the team to the Dutch league title and a Champions League semi-final place, he was expected to join his father-in-law Bert van Marwijk who currently manages the Bundesliga side Borussia Dortmund, but van Bommel opted to stay at PSV until the end of the 2004/2005 season.

After the Champions League semi-final loss to AC Milan, he was linked with a move to FC Barcelona, Real Madrid and AC Milan. With the Eredivisie title in PSV's hands at the end of April, he confirmed he would join FC Barcelona in May 2005 after the Catalonian club captured La Liga.

With Frank Rijkaard as his new coach at Barcelona, van Bommel played 24 matches scoring twice in his first season, winning La Liga and the UEFA Champions League with players such as Ronaldinho, Samuel Eto'o and Ludovic Giuly.

FC Bayern Munich
On August 26, 2006 Bayern Munich team manager Uli Hoeneß announced van Bommel would be joining the Bavarian side. Media reports speculated that the move was influenced by the ongoing Owen Hargreaves transfer saga, but Hoeneß insisted the club intended to go forward with both players. Bayern Munich paid $7.7million to Barcelona in the deal.

The Dutch national team manager Marco van Basten was dissatisfied with van Bommel's defensive performance in the 2006 FIFA World Cup qualification match against Romania and was subsequently not selected for the rest of the qualification series. With many Dutch football observers believing van Bommel's international career to be over, he was selected back into the Dutch side for the 2006 FIFA World Cup.

In the 2006 World Cup, van Bommel played in all the games for his country except the match against Argentina of which both teams have already, by then, sealed their passage to the knockout stage of the tournament. His position in the team was as right-half. His duties were mainly to play the anchor role in the Dutch 3-man midfield in their usual 4-3-3 formation.

He was the first of many players booked in the second-round match Dutch team defeat against Portugal dubbed 'The Battle of Nuremberg' by the press. After the World Cup, Van Bommel was not called up for the Euro 2008 qualifiers versus Luxembourg and Belarus. In September 2006, after his move to Bayern, he was added to Van Basten's squad to face Bulgaria; however Van Bommel stated (alongside Ruud van Nistelrooy) to no longer intend to play for 'Oranje' as long as Van Basten is in charge. Van Bommel has won 40 caps and has scored 7 goals for the Dutch national team.

Did you know?
Having joined Barcelona, van Bommel was taught Spanish in a convent just outside Eindhoven.

Other:
He is married to his ex-trainer's (Bert van Marwijk) daughter.
October 01 2006: Mark van Bommel has told Netherlands coach Marco van Basten that he will not play for the Oranje under the current coaching staff, the Royal Netherlands FA has announced. The good news is that now his father in law has taken over and there might be a chance for us to see him back in the Netherlands line.

If you'd like to check out a good interview with Mark, go on over to the FCB TV Homestory at Youtube.

A short clip of him speaking English because I adore him and his need to think as he speaks.

And just for humor sake; I am not the only one that thinks he's a sexy bastard ;)