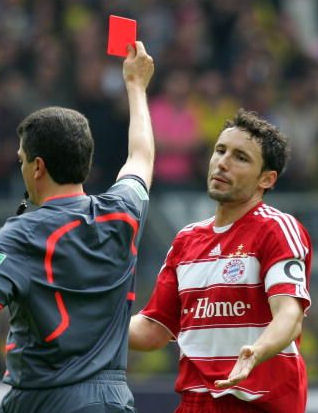 Angela is not happy. I will not even go into the lengths to why Mark getting red for this match was so utterly ridiculous. At this point, I am convinced he is carded simply because he is Mark van Bommel and has a previous reputation for being bad. He has come a long way, last season was a vast improvement in behavior. The cards that were issued against Bayern were downright ridiculous. The card against Luca Toni just baffled me. Of course, it's his fault that he was shoved by a Dortmund player. By all means, issue him a yellow. He was asking for it.

Lell is quickly becoming the object of my disdain. Surpassing Lucio and making me seethe with more anger than I thought was possible. The things that he pulls are so incredibly un-sportsman like and I am completely ashamed to have him on a team that I support. He continually goes unpunished for things that other people get booked on. He is getting more and more aggressive and unfortunately it's probably going to take someone getting hurt before he is punished for it. I do not like players like him. I do not like dirty players. He is the epitome of a dirty player. He goes unpunished; Mark gets punished for breathing. Talk about lopsided. At least my problem with Lucio is that he just tends to stand around a lot. My problem with Lell is that he actually appears to want to hurt people. And people talk about Mark's anger. Lell needs a little bit of anger management on and off the pitch, but I won't go there.

I keep hoping that Klinsmann has some grand plan up his sleeve and that I'll see, at least, a glimpse of the team Bayern are certainly capable of being, but each game I am left frustrated by their lack of coordination, lack of passing, lack of control and lack of attacking. Granted, a lot of things went against them today. The amount of yellows issued to them was absurd. If I had only just come into the world that is the Bundesliga, there is no way that you could convince me that this is the same team that won the double last season.

The second half they showed some promise, but they were still quite disheveled. Dortmund was the better team and after watching Bayern play today, I'd be happy with a mid-table finish at the end of the season. I know it's early, but they've got a lot of work to do. Klinsmann has got a lot of work to do. The loss of Ribery is killing them and making them weak. Toni will need a couple matches to get back. Klose is a mere shadow of himself. Podolski is good when he wants to be, but unfortunately he's content with just showing up most of the time. van Buyten had a good showing today. All too often Lucio just stands around and looks stupid when the ball comes near him. I keep hearing how he use to be such a great player (I wasn't watching then) and I am moderately frustrated by his continual screw ups and lack of ability to show that former great player. Lell is a dirty rotten player and I want him gone. Kroos has potential but he's so green that he makes a lot of rookie mistakes. Rensing looks like he's lost all confidence between the pipes and he's shakey at best. I am starting to question his ability to be the constant number 1. I know he has potential, but I am missing the way he use to defend his goal. Kahn is gone, he was handed the number 1 and given no competition. He has no reason to prove himself and he has lost that Rensing flair. It's a very sad day when I have to say that the saving grace of the match came in the form of Schweinsteiger and Borowski. They are the only ones that stood out.

Here's hoping Demichelis will come back and whip the defense into shape, Ribery will come back and breathe some new life into the team and Klinsmann will figure out exactly what it is that makes this team tick and they will start to look like they did last season because currently, this is painful to watch. Which, one would hope, will lead to the potentials, Kroos and Rensing namely, getting their chance to shine. Right now, the team is in such a state of disarray that potential doesn't matter. Chaos has taken over.