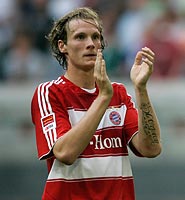 Marcell Jansen signed with Bayern in 2007 and I was pretty excited. Not only did he add to our growing list of boys with good hair, he is by far one of the most under-rated players in the league. Despite his height, he's quick and he has an incredibly accurate cross that can prove to be very detrimental to other teams. Marcell is also one of a dying breed; he is very fan oriented. He's one of those boys that always makes himself available and is more accessible. He has been known to give fans game worn jersey's and he will always make time to sign an autograph or take a photo.

Jansen is a very versatile player and the proof of this comes when you look at his young career. While Jansen is not quite 23 years old, he has already made 22 appearances for the German National Team as a left-back. At the club-level he has also played on the left of midfield and left wingback. Coming up through the youth ranks he has also featured as left winger and even striker. Adding to the resume was the UEFA Euro 2008 in which he appeared in injury time as a striker.

Borussia Mönchengladbach
In 1994, Jansen joined Borussia Mönchengladbach from local SV Lürrip in 1994 at which time he was already capped various times for Germany. Mönchengladbach's former manager Ewald Lienen appointed him to act as a substitute in a Bundesliga fixture of the club against Hannover 96 in September 2003. Jansen was unused and M'gladbach lost 0-2. That game would become Ewald Lienen's final game in charge of Mönchengladbach and Jansen had to revert to playing for the U-19 team. The start of the 2004-05 season was a lucrative one for Jansen. Manager Horst Köppel granted him senior status, allowing him games with the U-23 team in the fourth German division.

Another change of manager's came in the form of Dutchman Dick Advocaat. However, this was good news for Jansen as Advocaat quickly started relying on him and he debuted in Mönchengladbach's first team in an away fixture at Hertha Berlin in December 2004. Although Jansen caused a foul inside the box resulting in a penalty, Advocaat kept faith in him. Jansen's big opportunity came when Captain Christian Ziege received an injurty that sideined him. This was the opportunity Jansen needed. Shortly after his dismal first team debut, Jansen set out a string of impressive performances that kept Mönchengladbach's newly signed Belgian international Filip Daems (Ziege's proposed replacement) off the starting berth on left-back.

Bayern Munich
In the summer of 2006, many inquiries came from various teams, including Barcelona, Arsenal and Hamburg, but Jupp Heynckes refuted all claims, explaining that Jansen wasn't for sale. Nevertheless, Jansen moved in July 2007 to FC Bayern Munich for a fee of €9 million.

National Team:
While his first season with Borussia Mönchengladbach was a decent one, his second season was full of more success which led to him debuting for Germany's senior squad on September 3, 2005 against Slovakia. Jansen came on as a half-time sub for Thomas Hitzlsperger. After another season with Borussia M'gladbach, signing a new three year deal and helping them push out any fears of relegation, Jansen was named to the final 2006 World Cup team for Germany. Unfortunately for Jansen, he would only be able to make one appearance in the tournament because Philipp Lahm dominated his position. His appearance came against San Marino when Juergen Klinsmann switched Lahm right-back ahead of kick-off. Jansen would score his first goal in the match. Germany beat San Marino 6-0.

In June 2008, Jansen was selected for the German squad in the UEFA Euro 2008, and wore the number 2 jersey. He came on just after half-time of the final for Philipp Lahm. Germany went on to lose 1-0 to Spain.