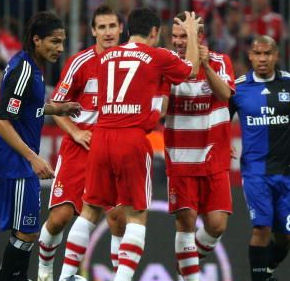 Before I start this post, I would like to with regular offside reader, Diana, a very happy birthday!

What an opener by both teams. Both teams were offense oriented and immediately took the ball back towards their opponents when they cleared it from their side. I was really pleased with this match and wasn't the least bit bored even for a second. What can you expect from a game filled with four goals, two penalties and five yellows?

The game kicked off rather quickly and the pace was up from the start by both teams. I wasn't sure what to expect given the fact that Bayern are missing Demichelis, Ribéry and Toni. And then you take a look at a somewhat discouraging performance during the midseason and I was left wondering how this game would turn out. It was clear from the preseason that we have some holes that need filling in our midfield and that was painfully obvious today. Lucio got hurt early on in the match, but due to Demichelis being injured and the lack of defensive players, he had to stay in. For the remainder of the first half, he pulled back quite a bit and left van Buyten to cover virtually every spot on the back line. van Buyten did a good job, but you have to wonder how long they can play like this. What I mean is, Lucio can't take a recovery match because there is no one to play his spot. van Buyten has a lot of skill, but he's not Demichelis. If Lucio gets injured furthered, Bayern is going to be in a tight spot.

Twelve minutes into the game, the Uli Hoeness warning shows its effects on Schweinsteiger when he finally scored a goal. Evidently the ultimatum of Schweinsteiger playing National level football at Club level or his contract won't get renewed was enough to put a little giddy up into his step and make us all remember why he can be such a valuable asset to have on the team.

Fifteen minutes into the match, Bayern were awarded a penalty when Mathijsen took to Schweinsteiger like glue and didn't let up until he took him down to the pitch. Podolski took the shot and scored. In the fifty-fifth minute Lell pulled a similar maneuver on Olić, bringing him down in Bayern's box. Trochowski took the shot and scored to draw even. There were two handballs against Hamburg that didn't get called.

I still think the biggest problem with the team is within the defense, but I hope that Klinsmann will get that worked out. Lucio had some good moments, but he also was the reason that Guerrero was able to score the first goal. Granted, he was facing injury, but he was still right with Guerrero and didn't make a move to defend at all. That goal was partially his fault.

The five yellows for Hamburg were awarded to Benjamin, Jarolim, de Jong and Guerrero. The lone yellow for Bayern went to none other than my favorite Captain, Mark van Bommel. I know, contain your shock. Even the commentators were thoroughly shocked responding with 'the first card of the season to Bayern though it certainly won't be the last for that man'. They were obviously incredibly surprised to see van Bommel get carded just like all of you were. ;)

Overall, the match was an improvement from the preseason and I'm feeling pretty positive about the teams efforts. There is still some work to do, but with Klinsmann's plans you can't expect it to be perfect over night. It was a good outing and a promising showing for future matches. Besides, after spending last season on top all of the time, it will be nice for them to have a little challenge.