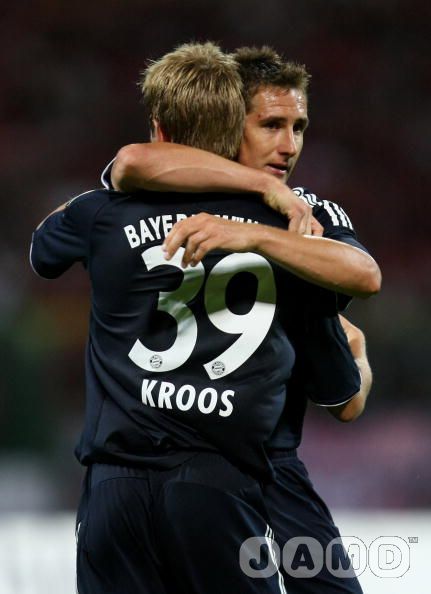 Today's match was the first round of the DFB Pokal. Bayern walked away with a win by handing Erfurt a 4-3 defeat. The score keeps them in their trend of scoring four goals against Erfurt each time they play them. I watched this game on a German channel with German commentary so it was a lot different for me. My German is pretty non-existent. I can pick up certain words here and there, but this forced me to pay much closer attention to the game and also helped me pick up some new words. The announcing was rather drab in comparison to what I'm use to, but it was interesting none the less.

I wasn't very happy with this match. The pace was once again slow and the defensive line was complete crap. Rensing looked like he'd barely played a match in his life. van Buyten made some crucial mistakes, but he was left to be the lone defender since Lucio never bothered to show up from the middle of the first half on. I'm all set to have these really great 'highlight of the match' segments at the end of my posts, but how can I do that when my team doesn't pull themselves together and play technically beautiful football? Last week the saving grace was Kroos and the addition of a gratuitous shirtless van Buyten shot. This week it was a yellow carded Mark with a gratuitous abs shot.

At the beginning of the match I was very hopeful. Bayern looked good and the were moving forward a lot. Erfurt was quick and had a more attacking style of play. The passes for the Bayern line were generally on target and right away Lahm scored. I thought this was going to be a stand up game for Bayern, but it was exactly the opposite. Somewhere around the middle of the first half, Lucio checked out completely and was no help to van Buyten. Where is Demichelis when you need him? Of course he has a valid excuse for not being in the line, but he was sorely missed today. van Buyten was off his game, but at the same time you can't fault him when he's getting no help. He saved Rensings butt at the end of the match where a shot from Erfurt threatened to tie the game once more and send it to penalties, but Daniel got his foot in there and kicked it out. The announcers commented about how Bayern had to win because if it went to penalties they'd miss their flight back to Munich.

I also think today was international pick on Toni Kroos day and see how often the opposition can knock him down, trip him, push him over, smack him and do as much damage necessary without drawing a card. It finally caught up to them near the middle of the second half, but it took awhile. Podolski's only noticeable moment was when he scored. Why on earth they didn't play Marcell Jansen is beyond me. I didn't hear of him being unavailable. He is under-rated and under-used. It is time to let him shine. Personally, I think he's one of the better pick-ups that Bayern has made lately. We definitely need Ribéry back as well.

Some parts of the game looked good, but others were so dismal that it didn't matter how good the good moments were. Highlights I suppose would be Klose, Lahm, Kroos and Podolski all scoring, van Buyten redeeming himself with a stellar save near the end and I'm going to have to stick with Mark's abs because overall, I wasn't that impressed with the play. Hopefully it's not a sign of things to come and hopefully I won't be this cynical all season. ;)

Below is a break down of goals and yellow cards as they were awarded: