Share All sharing options for: Bastian Stays, Daniel is hopeful

First the news of the day is that Bastian Schweinsteiger has stated that he would like a new contract with Bayern. Amongst all the speculation of a possible transfer from him, he has now come forward and said he wishes to stay at Bayern.

Bastian Schweinsteiger has outlined his intention to stay at Bayern Munich and sign a new contract. The Germany international rediscovered his best form at Euro 2008 and has been linked with a move to the Premier League.

"I'll be talking to Bayern before I talk to anyone else because Bayern Munich is my home." 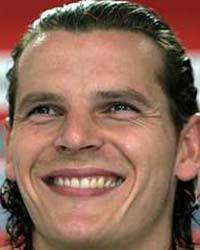 And for your enjoyment, an interview from the FCB Website with Daniel van Buyten in which he talks about being happy in Bayern, friendship with Franck Ribery and possibly finishing his career with the club.

Daniel van Buyten was captain of Hamburg when he came south to join Bayern two years ago, but the defender struggled to justify his position high up the dressing room hierarchy last season with just 19 Bundesliga appearances. However, despite a concerted campaign by his former fans in Marseille, thoughts of moving on have never crossed his mind, he revealed to fcbayern.de. The Belgian international is keen as never before to establish himself at Bayern, and even feels he could see out his career in Munich.

Interview: Daniel van Buyten
fcbayern.de: Daniel, are you happy with all the changes at Bayern?
Daniel van Buyten: "Yes, totally. The performance centre is really good. Everything complements everything else, and we're all delighted with what's been done."

fcbayern.de: It's all come together so well that Jürgen Klinsmann has decided not to run a training camp.
Van Buyten: "We have everything we need here for a full and productive day, without it ever becoming boring. Time passes quickly and we have loads of fun, which matters a lot. We have outstanding grass pitches, a weights room, great leisure facilities, and we eat well. You don't often get all that at a training camp. And sleeping in your own bed of a night is obviously nice."

fcbayern.de: What are the main differences under Jürgen Klinsmann and his brand new coaching line-up?
Van Buyten: "We have more coaches out on the practice ground with us. Training is much more personalised, according to Klinsmann's philosophy of helping every player improve every day. We did benchmarking tests to uncover areas of weakness right at the start, and that's where we're trying to improve. Each player has his own exercise schedule and doesn't necessarily do things he's already good at. After two weeks, I definitely sense positive improvements."

fcbayern.de: This is your third season at Bayern. Are you happy with how things have gone so far?
Van Buyten: "I'm personally very happy and satisfied. I always wanted to play for a really big club, and I consider it an honour to play for Bayern. I'm very proud of that fact, and last season hasn't changed it. I played 19 times in the league. One or two more matches might have been nice, but it's OK. I never considered moving on, and I continue to feel great emotional commitment to a club I used to follow with huge interest as a boy."

fcbayern.de: There must have been times last season when you felt justifiably dissatisfied…
Van Buyten: "There are always times when things go well, and times when they don't, but that's exactly when you have to stand up and be counted. You have to continue your work as a professional, and show what you can do in every training session. That's exactly my attitude. It would have been the easiest solution to fix up a move, but that's not the way I am. If I'd wanted a move, I wouldn't be here any more.“

fcbayern.de: Is it true that Olympique Marseille fans organised a campaign to persuade you into a return to the Stade Velodrome?
Van Buyten: "You always get enquiries from interested clubs, but I've told my agent I don't want to move. With regards to Marseille, I really did get a great deal of mail from Olympique fans trying to talk me into a return. Some of them actually said: 'Bring Franck with you and we'll win the Champions League.‘ But I want to stay at Bayern and finally make the breakthrough.“

fcbayern.de: What are your expectations of the new campaign?
Van Buyten: "The competition is always intense at Bayern, but we have a new coach, so we're all starting again from scratch. But I'm not setting myself a target in terms of number of appearances. That's a decision for the coach, but I'll make it as difficult as possible for him to overlook me.“

fcbayern.de: As a striker if necessary, or so we read in the papers – or was that just a joke?
Van Buyten: "I played up front until I was 20 and enjoyed it. I could always help out if the coach needed someone to hold the ball up and who's strong in the air. I'll always do my best for the team."

fcbayern.de: Are you looking forward to playing in the Champions League again?
Van Buyten: "Watching the Champions League on TV last term hurt a lot. We're back now and raring to go. We're determined to get as far as we possibly can, and why shouldn't we make the final in Rome? Bayern aim to do as well as possible in every competition the club enters. We have a great squad, so why shouldn't we make the final and win the trophy? We're certainly very hungry.“

fcbayern.de: Your homepage features three contrasting images of you: one indicating power with your arms crossed, one in a Bayern shirt with your back turned, and one as the Incredible Hulk. Why these three images?
Van Buyten: "I chose them myself because they reflect my personality so well. I can be very relaxed, but also evil and angry – it depends what I'm doing at any given moment. On the field of play I'm aggressive towards the opposition, but I'm a nice guy in private, maybe too nice sometimes. I'm certainly a big lad with a heart. You might need a couple more pictures to tell the full story.“

fcbayern.de: You're great friends with Franck [Ribery]. How's his recovery from injury?
Van Buyten: "He's in good shape and enjoying the last few days of his family holiday. He wanted to hear about all the changes and he's really looking forward to seeing it for himself. He'll be back soon, playing his practical jokes as usual. Naturally, he's looking forward to having the plaster taken off and resuming training.“

fcbayern.de: You're 30 now, an age when many players start thinking about the future – you too?
Van Buyten: "No. I really don't feel that old, more like 24 or 25. I want to keep playing for as long as I'm enjoying my football. I still have two more years on my contract with Bayern, but I could well imagine finishing my career here. What I'll do after that, I simply don't know.“