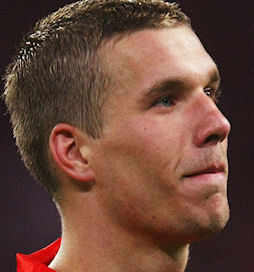 Over at the Germany Blog, Jan, myself and a couple of friends are busily blogging away about the Euro's and all I can think about is Lukas Podolski. More accurately, a very impressive, on form Lukas Podolski. The game against Poland saw Podolski give his heart. Two goals and an emotional display of love and affection for both of his countries. He showed the Polish side of his heart by keeping his celebration to a minimum, but showed his German side by playing with his whole heart.

Again today, Germany took on Croatia and while they took a loss, their lone goal came once more from Podolski. That got me thinking, what is it about the National side that brings out the absolute best in Podolski? Why is it that when he plays for the NT, he is golden, but when playing for Bayern, it's not that he looks completely sloppy, but he doesn't always look like he has given his best effort.

Is it comfort? Confidence? Whatever it is, Podolski put on that National jersey and he is solid. He plays with heart, passion and pride. It's good to see a glimpse of the Lukas Podolski that enjoys his game. A Podolski that smiles and has, once again, found that lethal left foot shot. It leads one to wonder if now is the time for him to move on from Bayern and find a club that he can play for with this much passion.

And just in case you missed it, after he scored twice against Poland, a Polish Politician (Miroslav Orzechowski) wanted to revoke Poldi's Polish passport. His response?

'The funny thing is, I don't even have a Polish passport,' said Podolski in the Kolner Express newspaper.
'The Polish Football Association never showed an interest in me.
'Only when I played for the Under-21s and was in the public eye did they start to make moves.'
Podolski refused to celebrate his two goals against the country of his birth and was seen consoling Polish family members in the stands after Sunday's game.
Despite Orzechowski's comments, Podolski maintains he has and always will have a strong relationship with Poland, although he is fully committed to winning Euro 2008 with Germany, as he showed at the weekend.
'I made a decision for Germany and it was the right one,' he added. 'Still, I have two hearts beating inside me.

And that my friends is a perfect example of Class vs No Class.