Share All sharing options for: Oh Captain, My Captain 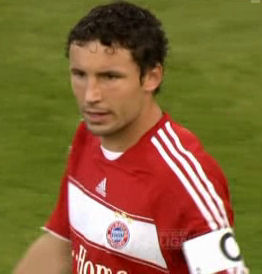 Yesterday I celebrated my birthday by reading an article in which Karl-Heinz Rummenigge says he sees Mark as the next Captain of Bayern.

"When somebody like Oliver Kahn retires, there are automatically changes in the hierarchy and there is more demanded from those that were behind him" explained Rummenigge, who recently nominated Kahn as the "most important Bayern player of the past ten years."

The battle for Kahn’s mantle as leader has already therefore begun, but the question remains- who will be the new Kahn?

Dutchman Mark van Bommel is the personal favourite of the Bayern chairman. The 31 year old was always second in line behind Kahn when he led the players out onto the pitch and Rummenigge sees him moving to the front of the line now.

Kahn himself feels van Bommel is the one to succeed him saying: "This attitude of always wanting to win is embodied in Mark."

The former Barcelona midfielder is also a favourite with the board as he is quick to recognize problems in the squad, and had a superb campaign last season. It was he who stepped in to save the Christmas party with an impromptu speech after Oliver Kahn had inexplicably left early.

Which would really be a fabulous birthday present for me really. I know that I've said before that I really would love to see him as Captain, but I can't say that enough. They also mentioned Demichelis as a 'possible future' Captain, but bias aside, I really believe that Mark is a better leader than Micho. It's got nothing to do with how I feel about him personally, but everything to do with the way he takes command and directs the team. Whether it's on the pitch during games, on the pitch during trainings, taking time to send each player on his team a text message when he's been suspended to motivate them for the game, making speeches in the locker room or team events, Mark is always the one that pulls the team together and he's quick to recognize when something is going wrong. He is everything that Bayern needs in a replacement to Kahn.

So I'm crossing my fingers and hoping that he will get it. I think he deserves it. If not, it won't make a difference in how he plays and as far as I'm concerned, just because he may or may not wear the 'C' he is already Captain at heart and he will continue to give his heart and soul to the team. It's just who he is.