Klose vs Toni: A friendly rivalry

Share All sharing options for: Klose vs Toni: A friendly rivalry 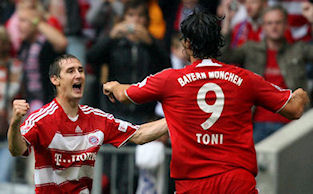 The season may be over, but that doesn't mean that teammates have gone away from each other entirely. When Klose first came to Bayern, it was Mark van Bommel who immediately took him in and forged a bond with him. He put Klose at ease and since they have become BFF. So much so that they travel together to and from training and games.

While Klose may have hit a goal scoring slump this season, undoubtedly the Dutchman probably came to his aide and held his confidence steady. He has always believed in his teammates and Miro. What does that have to do with Klose and Toni? Well, we've just been given proof that while some form may have been lost, Klose's confidence definitely has not been shaken. What does that have to do with Toni? Well, it's simple really, following in his BFF's footsteps, he has hedged a bet with seasonal teammate Luca Toni about who’s going to score more goals at the Euros.

Will we see Miro mimick Toni in a goal scoring celebration during the Euros? Wouldn't that be fun?