Share All sharing options for: Bayern - Hoffenheim; First Half 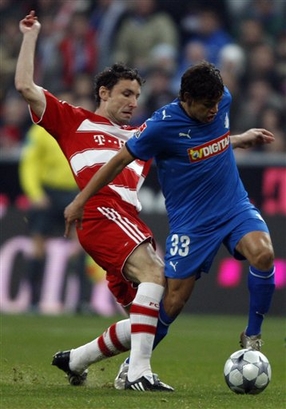 Bayern took on top side Hoffenheim in a match that was highly anticipated. The game started off with a very fast pace and I was surprised to see how quick the Hoffenheim players are. I haven't seen them play before this match so I wasn't sure what to expect. Before I get into game coverage, here are the starting lines for both sides:

I don't know what is going on with Luca Toni, but he certainly can't find the back of the net to save his life right now. Miroslav Klose took a hard knock from his own keeper, Michael Rensing. On the replay it looked like Rensing came down on the back of Miro's neck and head. He was taken off for a moment to be looked at, but he came back on moments later. I'm sure he'll be stiff tomorrow.

The first yellow went to Hoffenheim's Demba Ba for a high kick on van Bommel, but I'm not entirely sure it deserved a yellow card. However, if you're going to card that, the Lucio boot to Demba Ba deserved a yellow as well. Did anyone else notice the Miro shove at 28:30? He certainly isn't playing very nicely today.

The game is quickly becoming a very physical one. The ref doesn't seem very happy with either side at the moment. It will be interesting to see if this game comes to an end with 11 players on the pitch for both sides when it's all said and done. The rate they're going, it seems unlikely at the moment.

Luis Gustavo had a good shot on goal about 36 minutes in. It just went a little wide and it was probably Hoffenheim's best chance this half. Obasi got Hoffenheim's second yellow for a bad tackle from behind on Ze Roberto. He went off the pitch for a few moments as well, but quickly returned to receive Bayern's first yellow.

There were two minutes of stoppage time added on to the end of the first half. An interesting first half at that. No score, but very aggressive and very fast paced. Definitely not a boring game, but definitely a very aggressive, rough game by both sides. Curious how the second half will go.