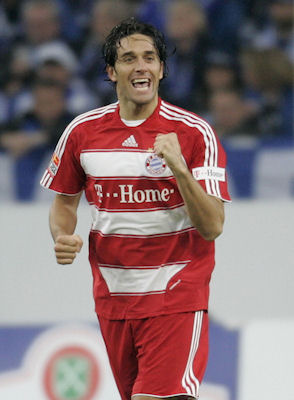 The boys were back in action today taking on Schalke 04. Before today's match, Schalke hadn't conceded any goals before the 29th minutes, but that all changed when my favorite, Captain van Bommel, took the ball down the right side and fooled all of Schalke's team who had Miroslav Klose covered. Mark dropped the ball back to a completely free Luca Toni who put it in the back of the net. Schalke responded quickly with a goal of their own to bring the score even at 1-1.

Rensing still has his moments of uncertainty, but there are moments when he looks completely unstoppable. There are still issues, even though it's still early in the first half, in the defense, though Lucio has made a couple really great efforts. He's still going to have to have several good matches for me to be convinced that Bayern shouldn't be using the combination of Breno/van Buyten. Rensing had a really great save 20 minutes in. If not for him being spot on, the ball would've been in the back of the net.

A beautiful goal from Ribery. An amazing pass from Ze Roberto. I am still so impressed by his level of play. It continues to improve each game. It looks like Franck's wife, Wahiba, has brought him some luck. When he was out injured, she wrote her name on a piece of cloth from his bandages that he wore during recovery from his surgery. Wahiba told Franck that he would play better and score if he wore it. Well, it looks like she was right. Since he's started wearing it, he has scored in every match.

Borowski received a yellow at 35 minutes... as the announcer put it, for bad acting. I'm not entirely sure what happened, but it looked like Boro got hung up with his feet being in between the other players, but Boro tried to plead something about his hand/wrist being held. I'm not sure that was the case, but there wasn't a good angle on it.

At the half, Bayern led 2-1. I am glad to see Oddo getting more and more playing time. This makes me very pleased. I am becoming a really big fan of his. Podolski didn't get much of a chance to shine in Toni's off time, but with Bayern looking to aquire another striker in January, it looks as though that might be the opportune time for Podolski to make his exit. He was missing from today's game due to having recurring back problems. In all this mess with him on the bench and not being happy, I just hope they let him go. He doesn't deserve the treatment he has received and it really irritates me that no-one is hearing what he's saying about why he wants to leave Bayern.

Shortly into the second half, Ze Roberto was replaced by Christian Lell. I don't know why this happened. In my opinion, Lell should be continually warming the bench. Ze is a class player and is much more needed on the pitch than Lell is.

The pace has really slowed down in the second half. A lot more aggressive tackling and a lot more showmanship in who can fall down the best, but the pace has slowed dramatically from the first half. So much so that even van Buyten kicked the ball back onto the pitch from the sidelines. Rensing is still a little shakey. He has had some good saves here, but I think that the guarantee of the number 1 spot when Oli left has made him slack a little bit and there isn't really any reason for him to try and play up to his absolute potential because he is guaranteed that spot. No one else on the team is guaranteed their spot so why should he be exempt from such rules? The same should apply to everyone.

Schalke had a good chance to tie things up in extra time, but they weren't successful. I am really enjoying watching Oddo as time goes on. Bayern are trying to keep possession in these last minutes and in a last ditch effort, Sosa took a run and should've brought the game to 3-1, but he just popped the post and missed the goal. Bayern walk away with a 2-1 victory. After this win, Bayern are still in third place, but they are only one point behind top of the table Leverkusen and Hoffenheim who each have 25 points.

At the end, van Bommel was giving his boys, Oddo at the time I seen it, some post match congratulatory love and while van Bommel was with Oddo, Miro was letting Franck know that he thought he had a great match. Franck continues to improve. Today was okay for me. I didn't think it was great, but it was better. It seems that Bayern are taking strides in the right direction.

Lastly, I have my best friend visiting from Holland so I will likely be posting limited for the next couple weeks while she is over. I will do the best I can, but won't promise anything. Stay safe and see you next time. :)