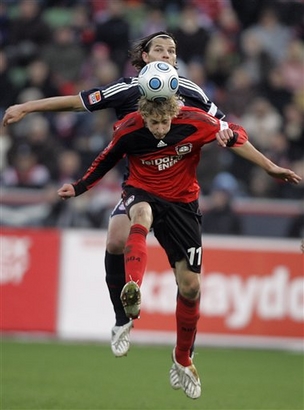 So, I finally get to watch a game as Bayern take on Leverkusen and what do I find, my captain, Mark van Bommel, is out with the flu. On the other hand, my second favorite, Daniel van Buyten gets another start due to Martin Demichelis being injured. Also out is Lukas Podolski with a back strain, but the good news is that Hamit Altintop is finally back on the bench after a long time out. I've heard nothing but good things about the mid-week CL match and wish I could've seen it. I hear another favorite of mine, Massimo Oddo, did a great job and this pleases me.

Leverkusen are still without the talent that is Bernd Schneider. He is one of my favorites on Germany's National Team and I do hope he will make a return some day. I really enjoy watching him play and I miss him quite a bit.

Patrick Helmes had an incredible shot at about 13 minutes. It went just over the bar. If it hadn't it surely would've been a goal for Bayer. There was also a great header nearly two and a half minutes later, but it just hit the top corner of the post and cleared away. Leverkusen are surely pressuring Bayern in this first half. Luca Toni had a great opportunity as well, but missed it. He's had some trouble finding his rhythm at the beginning of the matches. Hopefully as he continues to score he'll work something out even though most of his goals look like accidents instead of skill. ;)

Halfway through the first half the score was still 0-0, but both teams were trying quite hard to go one up. Bastian Schweinsteiger was having a pretty good first half. Speaking of Schweinsteiger, he still hasn't re-signed with Bayern and its rumored that his agent is having talks with Real Madrid. Luca Toni has spent a lot of time offside, which is nothing new really.

Lucio took a hard knock on the knee and seemed to be in a bit of pain, but played on for a bit. It got me to thinking, if Mark, Lucio and Demichelis are all out, who would be captain? Would it be Lahm? Or Schweini? Or would it be someone completely different? Curious. I almost wanted him to need to be taken off just so I could have an answer to that question.

At 59 minutes, the score was finally broken and Bayern went ahead 1-0 on a goal by Luca Toni. Lucio continues to take some hard hits and is limping quite a bit, but hasn't been pulled from the game yet. They should be careful that he doesn't get injured further.

Toni got the first yellow card for Bayern. He was quite theatrical about it, but it was completely deserved. Lucio and van Buyten have seemed to mesh well as of late. I always preferred van Buyten with Demichelis, but whatever kinks Lucio/van Buyten may have had, they were worked out for this match at least.

The second half of this game was rather boring. The first half started out much more exciting, but the second half has been terribly boring to me. It seems as though Bayern get a lead and tend to slow down and take it easy rather than trying to push for more of a lead. Tim Borowski got brought on for Luca Toni.

A clean sheet for Michael Rensing, which is fantastic. Though he wasn't really challenged at all in the second half. Miroslav Klose has certainly come alive in the last half of this match and is trying his hardest to put one in the back of the net. Finally in the 81st minute he chucked it into the back of the net on a great play that was started on an intercepted pass (isn't that American football?) from Lahm to Ribery on to Klose who put the ball in the back of the net.

Andreas Ottl picked up the second yellow card for Bayern in the 84th minute. Ze was pretty fantastic as usual. I am continually impressed with his performances. I swear the man is like a fine wine and just gets better with age. As much as I would like to see him stay on for another year at Bayern, I do believe he will be heading off to another league. Look for him to be joining the MLS' Dallas as they're courting him pretty hard.

And the girl in me is going to close with saying van Buyten has some really awesome legs. :D