Share All sharing options for: Transfer Rumors & Other News

PSV have conceeded defeat and are saying they are giving up on the quest for Mark van Bommel at this time. They understand that no one is to leave Bayern during the winter transfer window and so they will not be acquiring van Bommel in January as they had hoped. However, they may make a bid for him once more when his contract runs out in June. According to Adrie van Kraaij, PSV's transfer and scouting manager, Bayern have no intention of selling anyone in the winter window. "I have read that no-one is allowed to leave Bayern in the winter. We could offer them one million euros for a player whose contract has just six months left to run but Bayern have no money problems." If PSV don't make a bid for him at the end of the year, another club may try and get him. Currently, the rumor is that Liverpool are interested as well. 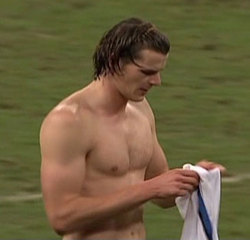 Over at Arsenal, Arsene Wenger isn't happy with the partnership of William Gallas and Mikael Silvestre so he's looking to fix up his defense. His decision is evidently to try and acquire Daniel van Buyten. Since van Buyten has already played in the Premiership (Man City), it is possible that Arsenal will try and make a bid for him in January. If the rumors are true and Bayern aren't going to let anyone go in January, they may try and make a bid for him at the end of the year. While he's not had much playing time with Munich (I won't even go into how much this disappoints me), he is still getting regular call up for his National Team and if he does go anywhere, the Premiership would be good for me because at least I can still watch him play on FSC. Yes, this is me being selfish again.

Then you have the news that Willy Sagnol might retire in May. Sagnol says that he is considering retirement due to injuries. If things don't appear to be any better for him in May, he will retire. He needed surgery on an Achilles tendon after playing for France at Euro 2008. Since then, an inflammation has hindered his recovery. Sagnol has played 184 times for Bayern and was a part of the team when Bayern won the Champions League in 2001. He hasn't played a game this season.

Ottmar Hitzfeld has said he is surprised by the sloppiness of Bayern's playing this season. "It is surprising that Bayern are dropping so many points against the weaker teams in the league." When Bayern had a 2-0 lead and everything turned upside down against M'gladbach, Hitzfeld was speaking for the Premiere channel as a Bundesliga expert. "Against direct rivals they are highly motivated and far more concentrated but against Gladbach, for example, they let their concentration drop by ten or even 20 percent." Hitzfeld went on to blame the defense for the mistakes against Gladbach. "That was down to individual mistakes in the defense. In a situation when all three points are already in the bag this simply can't happen."

Now we're going to take a turn in the saga that is Andrei Arshavin's story of leaving Zenit St. Petersburg. Deals with England and Spain fell through because Zenit won't budge on their £25million price for him and Arshavin has criticized the club for an unrealistic vauation, but he is pleased to hear the rumors that Bayern may be interested in signing him in the January transfer window. "I don't want to play for Zenit any more. Playing for Bayern is a dream."

So there you have it. I'm not sure how I feel about any of this.