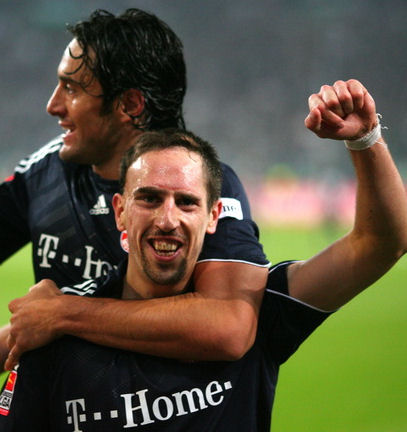 Today Bayern took on Borrusia Munchengladbach. The first half was a pretty aggressive by both sides. There were a lot of tackles, a lot of attacking and a lot of effort by everyone. It was an opportunity for me to see a little more of National Team player, Marko Marin. For such a young boy, he's got a fistful of talent. Twenty one minutes in, Luca Toni scored Bayern's first goal on a gorgeous play by Philipp Lahm and Mark van Bommel. It's good to see that Toni is finding his form and goal scoring ability again. Hopefully he'll keep that up.

Again, I'm reminded about how much I don't like the kind of player that Christian Lell is. He is not the kind of person I'd want on my team. Some... okay a lot of his behavior on the pitch is unsavory and the more I watch him pull some of the stunts that he does, the more I really dislike his playing style. He plays like he's out to hurt someone and I don't like that. Today his target was little Marko Marin and at one point he pulled him down by his shoulder which could've really hurt Marin. After which he received a yellow and got incredibly angry. I've said it before, but I'm going to say it again, if Mark is being made to see someone for his "anger" issues, then Lell should be seeing someone multiple times a day.

Near the end of the first half, Franck Ribery went up for a ball and collided with Levels from M'gladbach which lead to them both bleeding. Franck was bleeding on the back of his head and Levels was bleeding over his eye.

The first half was dominated by Bayern. The second half started with no changes to Bayern and one to M'gladbach. Marko Marin was taking a beating this match. At 55 minutes, Bastian Schweinsteiger received a yellow card for a tackle against Marin.

Miroslav Klose has found himself offside quite a bit lately. It seems he's taking over the role for Offside!Toni instead. Franck Ribery was taken down inside the box which gave Bayern a penalty kick. He scored and subsequently kissed the armband that holds the name of his wife.

After Ribery's penalty kick, Schweini came out for Borowski and Lahm came out for Sosa. Earlier, Martin Demichelis had a bit of a limp going on and seemed to either have pulled something or hurt his knee. Hopefully it's nothing too major and he won't miss any matches. Though if he did, it would give my Belgian a chance to play, though I'd rather see him play alongside Demichelis than Lucio.

Rob Friend out-jumped Demichelis to score near the 80th minute for M'gladbach. It was the Canadians fourth goal of the season. After the goal, Bayern made a substitution which brought Toni Kroos on for Klose. Not even two minutes later, the American, Michael Bradley scored again for gladbach bringing the score even at 2-2. It was Bradley's first goal of the season.

Borussia fought back and deserved to walk away with a draw this match. It has to somehow feel like a loss for Bayern after dominating at 2-0 with just 14 minutes to go. M'gladbach have to feel good about this. Near the 90th minute, Jose Ernesto Sosa made a hard challenge and got booked for it. A few moments earlier it looked as if van Bommel might get a yellow, but he didn't. Toni nearly headed in the winning goal for Bayern, but it went just wide to end the match in a draw. Overall, Bayern pretty much had control over this whole game. The defense looked better. The attacking looked better. This game was probably the best one this season as far as pace and playing goes. The team looked much better and much stronger. There are still some improvements to be made, some stupid mistakes being made, but this was much, much better overall.

And lastly, Marseille seem to be in the market for one Daniel van Buyten. :( And Mark's agent has spoken out about the rumors that Anatoli Tymoschuk will be coming into the team to make a replacement for Mark. :( He said: "We are still waiting for some news from Bayern. If they don't want him any more all they have to do is tell us. This is football." It's looking more and more like PSV will try and get him back and if not, he may end up at Schalke.