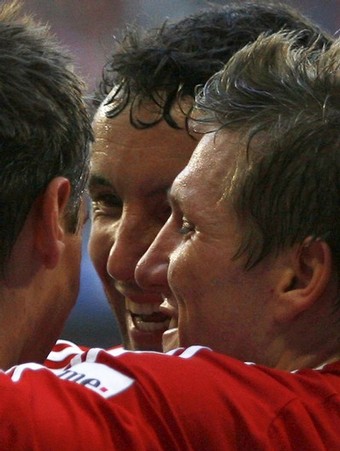 Well, that clearly was a game meant entirely for me. I'm posting this late as I didn't get to watch it when it aired due to a family obligation, but I recorded it and watched it this morning. I just want to make a couple of quick observations. Our defense is still very, very weak. Actually, let me correct that, Lucio is very, very weak. There were a lot of mistakes on his part. Demichelis is still the anchor in defense, but the more I watch Lucio play, this season especially, the more I can't understand why he is a starting defender.

Christian Lell is awful. I don't understand why management allows such a player to be part of their team. He is dirty. There is no excuse for his actions. If they've got van Bommel seeing the team shrink for his 'anger' then Lell should be triple booking sessions. I do not like this guy. He should've been sent off after that body check. A lot of his behavior is absolutely uncalled for.

Which brings me to van Bommel. Whether Klose should've finished that shot is no longer a point. The follow up header which resulted in van Bommel's equalizer was absolutely brilliant. It's good to see him scoring goals for both his National Team and his club as well. This was the highlight for me. Which I'm sure you all cheered loudly in my honor when you seen the goal knowing that your faithful Bayern blogger would've been completely ecstatic and believe me, I was. I am very happy for my Captain. :)

The more I watch him play, the more I enjoy Oddo. I think he was a good choice by Bayern. He was subbed early for Borowski, but I'm really starting to enjoy watching him play. Borowski is now the leading scorer for Bayern this season. He is becoming an asset to have on the team as well.

Age hasn't got a thing on Ze Roberto. He is just amazing. I swear he seems to get younger and younger every year. His play amazes me. And the penalty shot that resulted in Wolfsburg's first goal can't go unmentioned. It was completely the WRONG call to make. Demichelis didn't even touch the other player and the ref definitely made the wrong call here. I don't think I've seen a call this bad yet. It was clearly the wrong call.

Klose's form is a bit sporadic, but he's getting there. Podolski had the opportunity to seize the moment and he failed miserably. There was again no shining moment or a reason for him to be given a shot at the starting line. He will have a couple more opportunities, but unless he seizes the moment during one of those opportunities, I see no reason for him not to be warming the bench. I just wish Lucio would join him.

So now Bayern have 3 in a row and things are looking better. They're not out of reach in the table and if things continue to improve they'll advance. And the Champions League is providing great opportunities as well. For Bayern, goals came from Ribery, van Bommel, Borowksi and Schweinsteiger. Ribery is starting to look more and more like his old self. Things are looking up for this team.