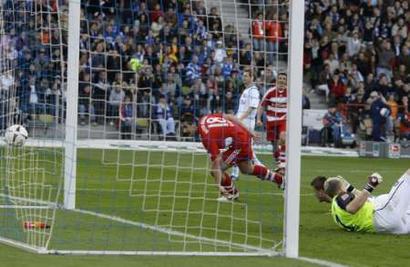 Today, Bayern took the pitch to take on Karlsruhe and Captain van Bommel returned to the starting line, rightfully so. After coming off of a mid-week international game in which van Bommel scored the Netherlands only goal, he finally got put back in the lineup by Klinsmann. Klinsmann had announced Mark's return to the line up by saying he hoped Mark's return would provide the team with some stability. And stability he did provide. I'm not sure that the yellow card was deserved. Even the commentator was a little miffed by the yellow being given to him. Generally Mark's fouls are quite a bit obvious, but I don't know that this one was deserving. I didn't think it was and neither did the commentator. I guess now he'll have something to talk about when he see's the team psychologist next.

Although I am very biased when it comes to Mark, I don't think you can argue against me for today's game. He had a spectacular game and was all over the place. Stealing the ball back each time it got turned over. He had a good read on one of the balls that went down into the corner by Karlsruhe and he got it back easily. I think today was a very solid performance by him. Unfortunately, I think it's time to let Luca Toni see a little bench time. I'm not a fan of Podolski's and today's performance didn't convince me that he should be getting game time at all, but he works well with Klose in the National Team and right now Toni can't seem to do anything right. It's time to give him a rest.

I'm still very, very disappointed in Lucio. Sometimes he does things that make me think that he's never played a game in his life. He has some strong points, but unfortunately his mistakes outshine the good things the majority of the time. I don't know what I think of Breno because he hasn't played enough and Daniel returned from International duty with a minor injury so he wouldn't have been an option. I don't think there is a coach at Bayern that has the cajones to sit Lucio out regularly anyways. There were still some pretty sloppy plays by the team, but there were a few strong points which could be built upon. I certainly hope that this game will help them turn things around and that they'll carry this momentum forward building on it and bringing home some more victories. I'm just concerned that there are still a lot of holes and a lot of weakness that could easily be exploited. As long as Lucio is in the line up, Demichelis is the only strong point of the defense. I do think that Demichelis and van Buyten work better together. It's a shame that everyone thinks Lucio is such an indispensable part of the team. 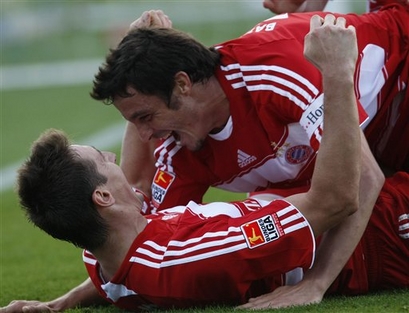 I had read a rumor that if Bayern didn't win this game, Klinsmann's job may be in jeopardy. I haven't read anything of solid information on that subject, considering just recently they guaranteed him a job through the season. Anyways, I guess he can breathe a sigh of relief since Bayern came home with a win. They should've scored two goals, but one is better than none. Just a few moments before the goal that was scored a good ball came through and both Borowski and Klose just stood there. Moments later, Klose rectified his error by scoring and doing his trademark flip which lead to him getting trounced by the whole team. I'm really starting to enjoy watching Oddo play. It's too bad he's just on loan. His crosses are just on target every time I've seen him do one and the through ball to Klose which lead to Klose scoring was just brilliant. And hey, he looks like he's enjoying himself because he was the first to lead the attack on Klose after he scored. Evidenty Klose either hurt himself during the flip or aggravated the blister he had during mid-week games because he came off for Toni Kroos and when he came off, he had a bit of a limp. Hopefully everything is okay there.

Overall a somewhat better performance by the team, but still not a great one. There is still a lot of work to be done, but they can get there. They are the same team that won the double last season and I guess this means that Klinsmann's job is secure for now, but they absolutely must continue to win games or fans and upper management alike will not be pleased. If it were anyone other than Klinsmann I think and ultimatum would've been issued already. We'll just have to see what happens.