Share All sharing options for: Klinsmann reads the offside 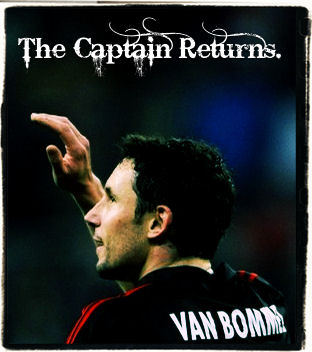 It's no secret here at the offside that I'm a big fan of van Bommel's. I've often commented on my dismay at him being left out of the starting line and how much I think he needs to be a part of the team. Whether people want to admit it or not, he is an intricate part of the team. He pulls the team together when no one else will. And as much as I enjoy Demichelis, he is not midfield material. He belongs in the back line and I think the mitakes that have been made have been a testament to that. Some of the problem belongs on Rensing's shoulders, he's been beaten 13 times, but the Bayern defense has had a hole in it since Demichelis was moved. van Buyten has, whether you like to admit it or not, been a life saver quite a few times, including saving Bayern's butt with a few goals. Lucio... has he even shown up lately?

So now the international break takes place and Klinsmann is rethinking his strategy. One would think he's been reading the Bayern Offside lately with the recent admissions he's made. Evidently, the "international break" has given him clarity and made him see the error of his ways and he's shaking things up in the starting eleven. It's time for some changes because obviously this strategy isn't working. He's been reading hasn't he? My guess is that Lucio and Demichelis will probably be reunited in the back line, which also makes me unhappy because I don't think that van Buyten deserves bench time at this point. van Bommel will make his return as captain and be back in the starting line, where he belongs.

Maybe we'll see the 'old' formation for the trip to Karlsruher at the weekend. Isn't this what we've been saying for a few games now? I wonder if Klinsmann has been browsing the blog and reading the comments during the 'international break' to see what everyone is saying about his team. I for one hope he's finally listening. Maybe we'll see a glimpse of what Bayern use to look like last season. And Angela just might be a content Bayern fan once again.